Lot of wags having fun (deservedly) today on news that the Ayn Rand Institute had received a huge bailout check from the federal government during the current Covid crisis.  Of course, she was famous for rejecting the notion of aid from on high during her life and in novels culminating in Atlas Shrugged.  She is also a featured character in my new book, published today,  on how Truman and the military perverted the first movie on the atomic bomb, from MGM.  The book also details how Rand wrote a truly wild competing script for Paramount, which ultimately never saw the light of day (until now).

The book follows Rand in the epilogue till the end of her life, when we meet Alan Greenspan and see that she accepted government dough even in her own lifetime.
### 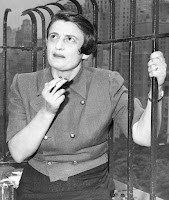 Critics vied in mocking Atlas Shrugged.  Granville Hicks in The New York Times Book Review judged that it was "written out of hate." Time magazine asked: "Is it a novel? Is it a nightmare? Is it Superman – in the comic strip or the Nietzschean version?"   Even some conservatives blasted it.  Whittaker Chambers, settling in at the National Review after the Alger Hiss controversy, called Atlas Shrugged.

But one of Rand's admirers, Alan Greenspan, wrote a complaining letter to The New York Times Book Review calling the novel "a celebration of life and happiness. Justice is unrelenting.... Parasites who persistently avoid either purpose or reason perish as they should."

Rand stayed true to her "Objectivist" calling into the 1970s when her health and income declined.   Going against her steely principles, she filed for Social Security and Medicare benefits.  When she died in 1974 she was buried in Valhalla, New York, with a six-foot floral arrangement in the shape of a dollar sign nearby.  Alan Greenspan attended the funeral.