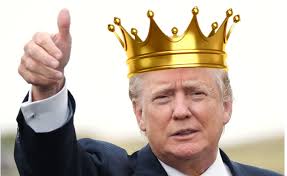 It's the story of the day--recording of insane Trump call to Georgia Secretary of State Raffensperger begging him to "find" the votes to overturn Biden win in the state and repeating numerous conspiracy theories, while promising actions if this does not happen.  Surely a felony in there somewhere.  While the Wash Post story is getting most of the links, others now also have the tape.

Shades of the Ukraine phone call: "So look. All I want to do is this. I just want to find 11,780 votes, which is one more than we have. Because we won the state.”   This guarantees Trump must self-pardon within next two weeks. Easily an impeachable offense if happened earlier.

Michael Bromwich, former Justice Dept. IG:   "Unless there are portions of the tape that somehow negate criminal intent, 'I just want to find 11,780 votes' and his threats against Raffensperger and his counsel violate 52 U.S. Code § 20511. His best defense would be insanity."

Imagine the dozens of similar calls we know nothing about.  Preet Bahara:  "Everyone who has a tape of Trump abusing his power should release it now."   Even the far from hot-wired Sen. Tim Kaine:  “This is fundamentally an effort to overthrow the government of the United States.”  Carl Bernstein:  "worse than Watergate...the ultimate smoking gun tape" and Trump must resign.  "A real threat."

GOP Rep. Adam Kinzinger:  "This is absolutely appalling. To every member of Congress considering objecting to the election results, you cannot--in light of this-- do so with a clean conscience."

Alexander Vindman:   "I’ve said it before and I’ll say it again. ⁦@realDonaldTrump is corrupt and this call fits a pattern of corruption. In time investigators will uncover a series of 'perfect' calls. Priority 1 will be uncovering corruption and protecting democracy."

Jake Tapper:  "The president in this audio issues all sorts of veiled and not-so-veiled threats against the Georgia Secretary of State to submit what would be a false vote count and reverse the election result. It is sickening."  Joy Reid:  "...sounding like a deteriorating, mad dictator."  CNN's Brian Stelter:  "They've turned the English language upside down. They say they're trying to save democracy while undermining democracy. They say 'Stop the Steal' while starting the steal."  Nick Kristof:  "It's a historical documentation of a president trying to steal an election."  Neal Kaytel:  "Sore (criminal) loser."  Howard Fineman:  "This is sick, criminal and dangerous. We have seen NOTHING like this from a president in our history! There has to be some punishment besides losing."

James Fallows:   "To underscore the obvious, this tape is incomparably more disqualifying than 1974 tapes, whose court-ordered release led to Nixon’s resignation.  Which also led to a delegation of senior GOP Sens/Reps to tell Nixon he must step down. Contrast that w current situation."  Lawrence O'Donnell:  "Trump got on the phone in the White House yesterday with the intention of committing a federal crime & the intention of pardoning himself for that crime. He'll also probably pardon everyone in the room who conspired with him in committing that crime."  Michael Beschloss:  "May God bless American public servants who stand up to illicit secret pressure from an American President." Daniel Goldman:  “It’s gonna be costly to you. I’ve charged extortion in mob cases with similar language."

Mike Birbiglia:  "That taped phone call feels like a single cockroach on the rug that indicates there are a lot more in the walls."

From the right:  Even Byron York:   "Trump steps way over the line in call to Georgia Secretary of State Raffensperger. Will be interesting to see if story causes some House & Senate Republicans to re-think their effort on his behalf."  Even Ari Fleischer:  "Pretty much everything the President said on this call was wrong, factually and morally. And good for Georgia Secretary of State Raffensperger." Jonah Goldberg:  "This tape of the Trump phone call is amazing. Unless you’re drunk on the Kool Aid, it’s glaringly obvious they just want to cheat. That’s it. Nothing clever. Nothing about patriotism or some higher calling. They’re just trying to cheat."  Bill Kristol:  "If we had two responsible parties, there'd be a statement now from Pelosi, McCarthy, McConnell and Schumer stating that--whatever Donald Trump says--all public officials should obey the law and Congress will ensure a peaceful and lawful transfer of power to President-elect Biden."

Andrew Sullivan:  "It’s still hard to absorb a president openly seeking to destroy the heart of our democracy. But listen to this delusional madman. Impeach him again."  Eric Boehlert:   "we’ve had a sociopath as president for 4 yrs and every newsroom in America was too afraid to say so."

Sarah Cooper, get right on this! Especially the parts where Trump twice calls himself a "schmuck" (for endorsing Gov. Kemp).    George Takei:  "Georgia knows, you can’t spell impeach without peach."