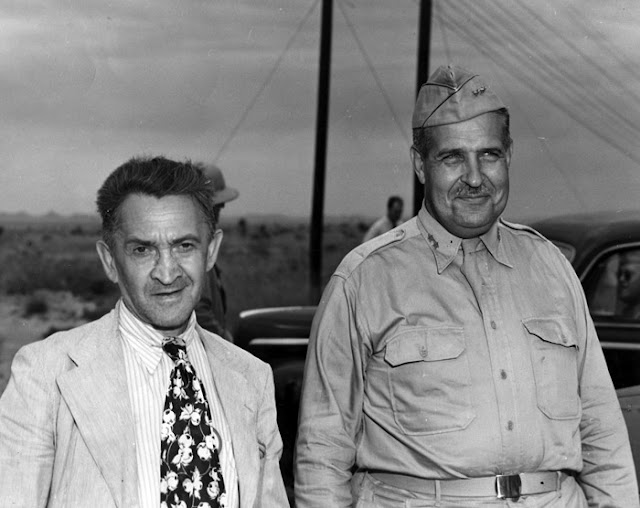 So here is today's rather brief entry for July 15, on the eve of the first, fateful test of the new weapon, at the Trinity site, following two days of assembly by scientists and technicians nearby.

We'll get into this more tomorrow, but just know that few precautions had been set for possibly evacuating local residents, despite the expected radioactive cloud and fallout generated and depending on the winds.  None were notified of the danger because of the top-secret nature of the bomb project and  media were in the dark as well.  Literally.  The test was set for the middle of the night, when nearly everyone in this remote area would be asleep, although this might guarantee that some kind of spectacular lighting at the horizon would be observed far away, perhaps even from Las Vegas.

Here is an excerpt on the final tension and mood from the Department of Energy's official history (that's General Groves with embedded New York Times reporter William L. Laurence above):

By 5:00 p.m. on the 15th, the device had been assembled and hoisted atop the 100-foot firing tower.  Leslie Groves, Vannevar Bush, James Conant, Ernest Lawrence, Thomas Farrell, James Chadwick, and others arrived in the test area, where it was pouring rain.  [Project leaders] Groves and J.  Robert Oppenheimer, standing at the S-10,000 control bunker, discussed what to do if the weather did not break in time for the scheduled 4:00 a.m. test.

To break the tension, Enrico Fermi began offering anyone listening a wager on "whether or not the bomb would ignite the atmosphere, and if so, whether it would merely destroy New Mexico or destroy the world."

Oppenheimer himself had bet ten dollars against George Kistiakowsky's entire month's pay that the bomb would not work at all.