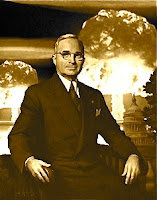 --Secretary of War Stimson sends semi-final draft of statement for Truman to read when first bomb used and he has to explain its use, and the entire bomb project, to the U.S. and the world, with this cover note: "Attached are two copies of the revised statement which has been prepared for release by you as soon as the new weapon is used. This is the statement about which I cabled you last night.  The reason for the haste is that I was informed only yesterday that, weather permitting, it is likely that the weapon will be used as early as August 1st, Pacific Ocean Time, which as you know is a good many hours ahead of Washington time."  The statement would later be amended to include the name of the first city destroyed and add that it was not a city but a "military base."

POKERAMPM88 said...
This comment has been removed by a blog administrator.
Wednesday, April 29, 2020

thaibon said...
This comment has been removed by a blog administrator.
Friday, May 01, 2020

capsaonlinecc said...
This comment has been removed by a blog administrator.
Saturday, May 02, 2020

cemeonlineco said...
This comment has been removed by a blog administrator.
Saturday, May 02, 2020

agenp2playsite said...
This comment has been removed by a blog administrator.
Saturday, May 02, 2020

agencemeonlinetop said...
This comment has been removed by a blog administrator.
Saturday, May 02, 2020

agenjudibakaratcom said...
This comment has been removed by a blog administrator.
Saturday, May 02, 2020