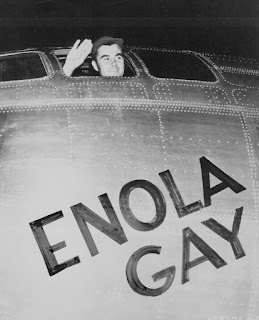 Talk about "cancel culture":   Back in 1994-1995, I was one of a small group of historians and journalists who were at the center of what you might call a "counter-protest" at the Smithsonian's Air & Space Museum in Washington, D.C.

Some of you may recall the widely-publicized scenario:  The Museum had attempted to mount the first balanced, full and accurate historical reckoning of the atomic bombing of Japan, for the 50th anniversary, in an exhibit surrounding the triumphalist, first partial (front half) display of the restored bomber that dropped the new weapon over Hiroshima, the Enola Gay.  When right-wing media and congress members and veterans groups were leaked an early script, they went ballistic (so to speak).  The Air Force Assn. charged that it treated Japan and the U.S. "as if their participation in the war were morally equivalent,”  which was nonsense.  Sen. Nancy Kassebaum (R-Kans.) sent a letter to the Smithsonian calling the exhibit (which no one had seen yet) “a travesty.”


All of these sorts successfully brought pressure on the Smithsonian (and White House) to force a complete rewrite, so that the exhibit became a one-note, and historically inaccurate, glorification of the bombing with no shades of doubt.

Then they forced the canceling of the entire exhibit so the plane, in all its glory, stood alone. As one of the curators, Tom Crouch, complained-- critics of the exhibit had a “reluctance to really tell the whole story. They want to stop the story when the bomb leaves the bomb bay.”

Now the bomber  sits, fully restored, in an annex in the suburbs, for visitors who arrive.

I was intimately involved for months in the push-back, attended meetings in D.C. with the museum director, and more, to no avail (even witnessed civil disobedience at the museum on the day the exhibit opened).  Anyway:  Too much to recount, but here's a link to a letter that we wrote (signed by many historians) and sent to the Smithsonian director.  My new book, The Beginning or the End:  How Hollywood--and America--Learned to Stop Worrying and Love the Bomb very much speaks to this kind of denial and suppression.
Posted by Greg Mitchell at 9:43:00 AM