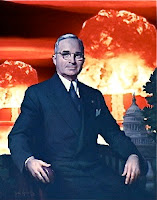 Just a short update on THE BEGINNING OR THE END:  How Hollywood--and America--Learned to Stop Worrying and Love the Bomb,  published this week by The New Press.  It reveals how Truman and the military sabotaged the first movie epic about the bomb, from MGM--and why this matters today. You can order the book at a special price right now at Amazon or from your favorite indie site. "A fascinating, sharp-eyed study of Hiroshima's cinematic aftershocks," comments Nicholson Baker, author of Human Smoke and other acclaimed books. Rod Lurie, director of the #1 movie in America right now, The Outpost, calls it "an obvious 'must buy'-- especially if you are interested in World War 2, cinema, or modern American history."

Here are five "blurbs," from the leading authority on the bomb, Richard Rhodes, and best-selling authors Gary Krist, Peter Biskind, Nicholson Baker, and Alex Kershaw.   The new book, of course,  marks the 75th anniversary of the creation and use of the bomb against Japan.  I will also note that I have just finished writing and directing my first film, based on a previous book, Atomic Cover-Up.  You can contact me at:  gregmitch34 (at) gmail (dot) com.


"This intriguing, behind-the-scenes look at a disjointed creative partnership is sure to be of interest to readers of history and cinema." --Library Journal

"Seriously, this is a great book." --  Kurt Eichenwald, author of The Informant and Conspiracy of Fools

"A great new book  that you're going to want to read.  The book conjures up a compelling cast of characters who got caught in the Cold War propaganda machine."  -- Will Bunch, Philadelphia Inquirer

"A book that features both J. Robert Oppenheimer AND Donna Reed has to be good."-- Dan Barry