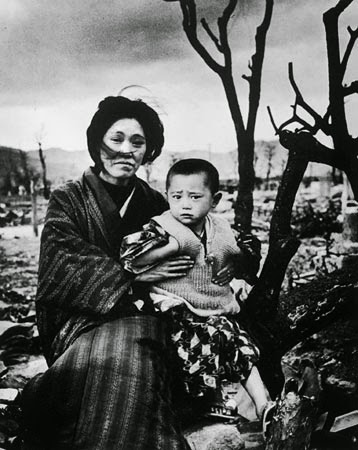 Every year at this time, I trace the final days leading up to the first (and so far only) use of the atomic bomb against Hiroshima and Nagasaki  in August 1945. This is a subject that I have studied and written about in hundreds of articles and three books (including the new one, The Beginning or the End: How Hollywood--and America--Learned to Stop Worrying and Love the Bomb) since the early 1980s with a special emphasis on the aftermath of the bombings, and the government and media suppression in the decades after.  For earlier days scroll down main page for this blog.

Truman continued to meet with Allied leaders in Germany, as the Soviets got ready to declare war on Japan around August 8 ("fini Japs" when that happened, even without the bomb, Truman had written in his diary this week).

"A Petition to the President of the United States" organized by famed nuclear scientist Leo Szilard, and signed by dozens of his Manhattan Project colleagues -- the only real pre-Hiroshima protests by insiders -- urgently urging delay or extreme caution on the use of the new weapon against Japan, continued to be held in limbo and kept from the President's eyes while Truman remained abroad.

Preparations at Tinian in the Pacific to get the first A-bomb ready for use, possibly within a week (weather permitting) were finalized, with the city of Hiroshima remaining as #1 target. It has been barely touched by Allied bombing so it would serve as the best site to judge the bomb's experimental effects.  Also it is nearly surrounded by hills, promising a "focusing effect" (as the target committee boasted) that will likely guarantee killing tens of thousands.  Kokura was target #2 and Nagasaki #3, with the bomb on an assembly line process with no need for  a separate order for the second and third bombs, which would doom, in the end, Nagasaki.

The Japanese government today released an edited version of the "unconditional surrender" Potsdam declaration (which did not mention the atomic bomb) to their press and citizens, but had not yet rejected it. The Domei news agency had already predicted that the surrender demand "would be ignored." The U.S, after use of bomb, would later accept conditional surrender -- with Japan allowed to keep its emperor -- yet call it unconditional.

Eleven days after the first, and quite secret, atomic test at Trinity, which spread wide clouds of radioactive fallout over residents downwind -- livestock had been sickened or killed -- radiation experts had become concerned about the exposure for one family, the shape of things to come.
Posted by Greg Mitchell at 6:00:00 AM