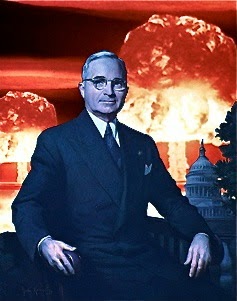 Every year at this time, I trace the final days leading up to the first (and so far only) use of the atomic bomb against cities, Hiroshima and Nagasaki, Japan, in August 1945.   In this way the fateful, and in my view, very tragic, decisions made by President Truman and his advisers can be judged more clearly in "real time."  As many know, this is a subject that I have studied and written about in hundreds of articles and three books (including the recent Atomic Cover-Up on the U.S. suppression of film for decades)  since the early 1980s with a special emphasis on the aftermath of the bombings, and the government and media reactions in the decades after.

--Two days after receiving it, the Japanese leadership  rejected the Potsdam declaration calling for their "unconditional" surrender, or seemed to. The official word was that it would ignore the demand mokusatsu, or "with silence." Another translation, however, is "to withhold comment." This not-quite-rejection has led some historians to suggest that the U.S. should have pursued the confusing Japanese peace feelers already circulating, especially with suggestions that unconditional terms were the main, or perhaps only, obstacles.

--Secretary of the Navy James V. Forrestal had breakfast with Truman at Potsdam.  He had flown there at least partly to press the president to pursue Japanese peace feelers--especially concerning letting them keep their emperor--before using the bomb and killing countless civilians.

--Returning to Washington from Potsdam, Secretary of War Henry Stimson consulted with the top people at Los Alamos about the bomb (or "S-1" as it was then known) and wrote in his diary. "Everything seems to be going well."

--U.S. Ambassador to Moscow Joseph Davies wrote in his diary that Secretary of State James Byrnes was overly excited by the success of the bomb test vis-a-vis future relations with our allies, the Soviets: "Byrnes' attitude that the atomic bomb assured ultimate success in negotiations disturbed me more than his description of its success amazed me. I told him the threat wouldn't work, and might do irreparable harm." Four days earlier, Byrnes aide Walter Brown had written in his diary that Byrnes' view was that "after atomic bomb Japan will surrender and Russia will not get in so much on the kill." The Soviets were scheduled to enter the war on August 7 (which likely would have prompted a Japanese surrender, even without use of the Bomb), so there was some urgency.

--A U.S. bombing raid on the small Japanese city of Aomori -- which had little military significance beyond being a transportation hub -- dropped 83,000 incendiaries and destroyed almost the entire city, killing at least 2,000 civilians.
Posted by Greg Mitchell at 8:51:00 AM