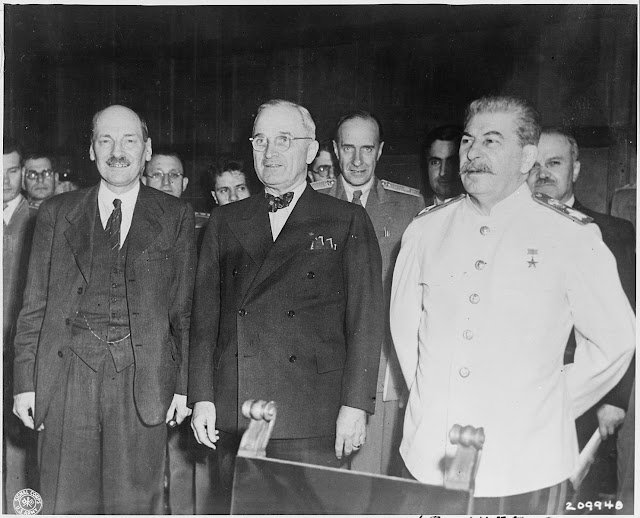 Every year at this time I trace the final days leading to the first use of the atomic bomb against Hiroshima and Nagasaki in August 1945.   In this way the fateful, and in my view, tragic decisions made by President Truman, his advisers, and others, can be judged more clearly in "real time."  As some know, this is a subject that I have explored in hundreds of articles, thousands of posts,  and in three books, since 1984:  Hiroshima in America (with Robert Jay Lifton), Atomic Cover-up and last year's Hollywood epic, The Beginning or the End.   Now I've directed an award-winning documentary.

At Potsdam, Truman wrote in his diary today:


"P.M. [Churchil] & I ate alone. Discussed Manhattan (it is a success). Decided to tell Stalin about it. Stalin had told P.M. of telegram from Jap Emperor asking for peace. Stalin also read his answer to me. It was satisfactory. Believe the Japs will fold up before Russia comes in. I am sure they will when Manhattan [reference to Manhattan Project] appears over their homeland. I shall inform about it at an opportune time."

So there is a "telegram from Jap Emperor asking for peace."  Of course, we'll never know if peace could have been worked out shortly. One  hang-up was that the U.S. was demanding "conditional surrender" while the Japanese wanted to be able to keep their emperor as a figurehead.  Of course, after we dropped the bomb, we allowed this condition.  This, and Truman's view that the Soviet entry into the war, set for around August 12, would provoke a surrender made it vital for him--in the view of some historians--to use the new weapon as soon as possible.

Truman also wrote a letter to his wife Bess, affirming his belief that the Soviet declaration of war--even without the Bomb--would cause an end to the war well before the planned U.S. invasion.


I've gotten what I came for - Stalin goes to war August 15 with no strings on it... I'll say that we'll end the war a year sooner now, and think of the kids who won't be killed! That is the important thing.

Useful article, thank you for sharing the article!!!