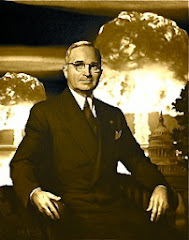 Every year at this time, I trace the final days leading up to the first (and so far only) use of the atomic bomb against cities, Hiroshima and Nagasaki, Japan, in August 1945.   This is a subject that I have studied and written about in hundreds of articles and three books (including Atomic Cover-up  and Hollywood Bomb) since the early 1980s with a special emphasis on the aftermath of the bombings, and the government and media suppression in the decades after.

July 22, 1945:  Still at Potsdam, Secretary of War Stimson meets with Prime Minister Churchill, who says that he was baffled by President Truman's sudden change in getting tough, almost bullying, with Stalin--but after he learned of successful first A-bomb test at Trinity he understood and endorsed it.

Everyone also cheered by "accelerated" timetable for use of the bomb against cities--with first weapon ready about August 6.  Stimson in diary notes that two top officials endorse his striking off the city of  Kyoto (which he had visited and loved) from the target list because of its cultural importance.

The U.S. learns through its "Magic" intercepts that Japan is sending a special emissary to the Soviet Union to try to get them to broker a peace with the U.S. as soon as possible (the Japanese don't know the Russians are getting ready to declare war on them in two weeks).  Of course, as we noted earlier, Truman--who wrote in his diary it meant "Fini Japs" when the Soviets entered war--now hoped to use the bomb before then.