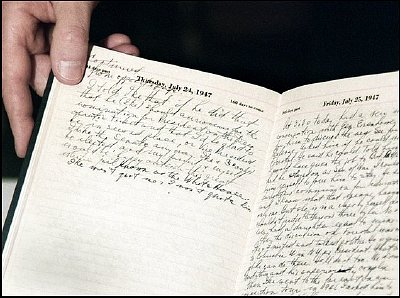 Now, today's entry, going back to July 17, 1945.
*
Even at this late date, in 2021, Americans would be surprised to learn that President Harry S. Truman, just three weeks before ordering use of the new atomic bomb against Hiroshima, wrote in his diary, after meeting Joseph Stalin in Germany, that the Russians’ promised entry into the war against Japan would end the conflict—“Fini Japs”—even without the Bomb. It happened on this date in 1945.

As it happened, the Russians did enter the war—on schedule—within two days of the bombing of Hiroshima, and some historians believe that this shock, as much as the two A-bombs (the second against Nagasaki on August 9), provoked the speedy Japanese surrender a few days later. The question remains: Would this have happened without the Bomb? It’s a close argument, but the fact remains: most citizens of the only country to use the dreadful weapon (killing 200,000 civilians) are not even aware of it.

Now here, verbatim, is a famous (to some) passage from Truman’s diary on July 17, 1945. Also note Truman’s assessment of Stalin as “honest.”


Just spent a couple of hours with Stalin. Joe Davies called on Maisky and made the date last night for noon today. Promptly at a few minutes before twelve I looked up from my desk and there stood Stalin in the doorway. I got to my feet and advanced to meet him. He put out his hand and smiled. I did the same, we shook, I greeted Molotov and the interpreter and we sat down.

After the usual polite remarks we got down to business. I told Stalin that I am no diplomat but usually said yes and no to questions after hearing all the arguments. It pleased him. I asked him if he had the agenda for the meeting. He said he had and that he had some more questions to present. I told him to fire away. He did and it is dynamite—but I have some dynamite too, which I am not exploding now. He wants to fire Franco, to which I wouldn’t object and divide up the Italian colonies and other mandates, some no doubt that the British have. Then he got on the Chinese situation told us what agreements had been reached and what was in abeyance. Most of the big points are settled. He’ll be in the Jap war on August 15. Fini Japs when that comes about.....

We had lunch, talked socially, put on a real show, drinking toasts to everyone. Then had pictures made in the backyard.

I can deal with Stalin. He is honest, but smart as hell.

Most American when asked about the Soviets entering the war at that late day seem to believe they were just   “getting in on the spoils.”  In fact, we had demanded that the Soviets do this and we knew it was coming, bomb or no bomb. This has led to theories – which I have never embraced – that the main reason we dropped the bombs, knowing Japan was already defeated, was to keep the Soviets out of Japan, and intimidate them in the postwar era.   I’d call this a reason, not the reason.

Be that as it may, there is no question that the Soviet declaration would have had a huge impact on the Japanese.  That's why Truman, in his diary, declared that the Russian attack alone meant "fini" for "the Japs."

The key point is:  We didn’t wait around to find out if the Japanese would have surrendered to us shortly (especially after we let them keep the emperor) to prevent the Russians from invading, or if a strong nudge via use of our bomb would have been required.
Posted by Greg Mitchell at 1:00:00 AM