A fallen soldier's dogs come to the USA 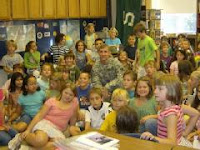 Some may recall that at the end of December, I posted a couple of reports about an American soldier, Peter Neesley, who died in Iraq on Christmas Day -- and the amazing outpouring of tributes from friends and family members at this blog. I've just heard from one of Peter's aunts, Julie Dean, who writes, "Just wanted to let you know that on Friday, Peter's two dogs that he found while on patrol in Baghdad were brought home to Michigan through an unbelievable effort. Senator Levin's office, Governor Grandholm's office, Best Friends Animal Society, The Iraqi Society for Animal Welfare, Gryphon Airlines and John Wagner, Carey (Pete's sister), Sarah Kelson(cousin) and myself worked nonstop as well as many more.

"We had the support of a tremendous number of friends and people touched by Peter's death who emailed information to us and asked officials in governmental offices to help. Wow--unbelievable. Peter was a kind soul who inspired loyalty and friendship. His pups have come home." The story has now made national news. The photo (above) is Peter visiting kids at his old school in Michigan. Here is a link to a column I wrote at E&P.
http://www.editorandpublisher.com/eandp/news/article_display.jsp?vnu_content_id=1003689713
Posted by Greg Mitchell at 10:09:00 PM

What a marvelous story! It must be so hard for all of these soldiers to hold onto their humanity. This is just one more example of how dogs help humans.

Many might only focus on how the this dear man helped the dogs but look at how they helped him. They helped him maintain how he saw himself as someone who could help others even in the midst of a moral morass.

Bless you, Peter Neesley! And bless his family for fighting to get the dogs he loved to safe homes! I'm sure he is happy to see his family honor his life and legacy.

It was certainly interesting for me to read this article. Thanx for it. I like such topics and everything connected to this matter. I definitely want to read more soon.

Don't stop posting such themes. I love to read stories like this. BTW add more pics :)