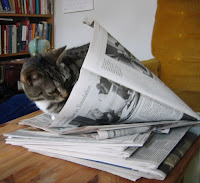 New York magazine report this morning claims that paper is ready to adopt SOME kind of pay system for its site, with various options possible, including a "meter." Here is the lede:

New York Times Chairman Arthur Sulzberger Jr. appears close to announcing that the paper will begin charging for access to its website, according to people familiar with internal deliberations. After a year of sometimes fraught debate inside the paper, the choice for some time has been between a Wall Street Journal-type pay wall and the metered system adopted by the Financial Times, in which readers can sample a certain number of free articles before being asked to subscribe. The Times seems to have settled on the metered system.

One personal friend of Sulzberger said a final decision could come within days, and a senior newsroom source agreed, adding that the plan could be announced in a matter of weeks. (Apple's tablet computer is rumored to launch on January 27, and sources speculate that Sulzberger will strike a content partnership for the new device, which could dovetail with the paid strategy.) It will likely be months before the Times actually begins to charge for content, perhaps sometime this spring.

i believe this is the new york times coming full circle, not starting to charge, but rather returning to the fee model it began with when it first launched its web content.

I spent one day building a simple [url=http://ds-2300.blog.friendster.com/2010/09/grundig-shortwave-stereo/]blogs[/url]. Could you give me some suggestion?