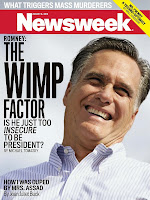 Romney has already responded to new Newsweek cover, claiming on CBS this morning that he had never been called a "wimp" before (to this face). I guess there's another word for someone who cuts off hair of gay kid and ties dogs to roofs.  Here's the cover story.  They say Mitt makes "Poppy" Bush look like Dirty Harry.
Posted by Greg Mitchell at 12:41:00 PM