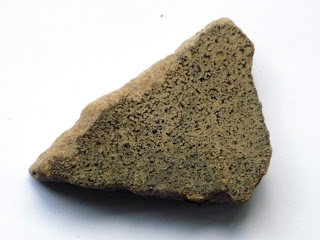 After I visited Hiroshima for nearly three weeks in 1984 (and also for a few days, Nagasaki) on a journalism grant I returned home with enough material, and inspiration, to write dozens of articles, hubdreds of blog posts and three book, over the following decades.  I also came home with a very tangible, haunting, artifact, given to me by one of my hosts:  a piece of a stone tile that once lined one of several branches of the Ota River that cuts through Hiroshima.  It had been in place there on August 6, 1945, and survived the atomic bombing--but was burned black on most of one side (indeed, the other side is unmarked).

That's a photo of it, still in my possession, above.  Imagine the level of heat required to burn stone in this way. Then imagine deliberately exploding a new weapon, which also emitted deadly rays of radiation, directly over the center of a large city populated largely by women and children.

It's particularly haunting if you know that the rivers played a key role in the immediate aftermath of the atomic bombing, as tens of thousands staggered there seeking comfort, only to end up boiled to death or simply succumbing to their wounds or radiation.  Thousands of bodies would bob on the river for days.  The tile, like so many of the victims, was burned black, an anonymous object like all the rest, only it cannot feel pain, and recall it.

Hi I have a tile given to a friend who has pased away. It was given to him by Rev. S Katsuki the priest of Sairenji the explosion centre Hiroshima. Neale Scobie Qld Australia

We’ve been stumbling around the internet and found your blog along the way.

We love your work! What a great corner of the internet :)

Sometime few blogs become very helpful while getting relevant and new information related to your targeted area. As I found this blog and appreciate the information delivered to my database.

Appealing website great info,for those who are die hard sports fan
Today with modern chromecast, or HDTVs, laptops and fiber fast internet we can simply connect to our favorite sites and watch every sporting event right in our web-browser for free.