Obama's Cure For What Ales Us 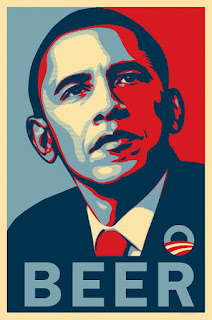 We brought you news recently of the White House, under pressure, finally releasing the recipe for a pair of beers (or ales, as it turned out) allegedly brewed there.  Now the NYT has given them a test drive, via the famous Brooklyn Brewery.  The ale-in-action report now posted. So:  "Our couple of gallons of wort boiled merrily along for 45 minutes, until it was time to add the pound of honey. Honey has a lot of volatile aromatics, and if we had added it earlier, some of that aroma might have boiled off. So the recipe adds it toward the end of the boil, locking the flavors into the wort...." Then the hops and...pardon me, while I pause for a Guiness.
Posted by Greg Mitchell at 4:36:00 PM