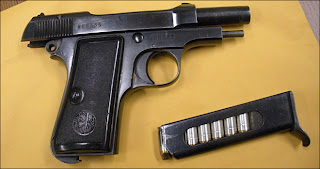 A 7th grade tudent a class trip to see the new movie The Hobbit in Tillamook, Ore., found a loaded pistol on the floor of the movie theater (see left).  "The unidentified Tillamook Junior High School student who found the weapon informed an adult who was with the class. The semi-automatic handgun was loaded and had the safety switched off, according to the Tillamook Headlight Herald newspaper."

After police searched the theater, the movie resumed.  No biggie in fortress America.  (h/t @HnstyNgov)

UPDATE   Owner of gun showed up to claim it later.


On Wednesday evening, Gary Quackenbush, 61, turned up at the theater seeking his missing gun, "like it would be in the lost and found with lost eyeglasses and other things," said Long.

"He has a concealed handgun license," Long said. "That will be revoked tonight. The law says if you are a danger to yourself or the public, it can be revoked."

A man answering a phone number listed for Quackenbush laughed and told a reporter, "Get a life."