Friedman and His War of Choice (With Popcorn) 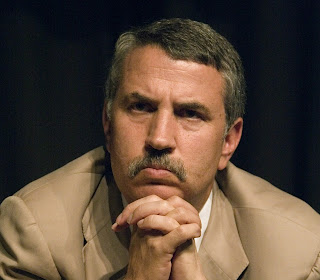 Today, NYT columnist Thomas Friedman's punditry related to the Iraq war are best known for what he wrote in the aftermath of our invasion: his repeated forecasts that things would be turning around for us there in another six months--hence the birth of the "Friedman Unit."   But what about just before Bush started the war?  We're now into the 10th anniversary of the four weeks leading up to the invasion.  So what did Friedman write exactly 10 years ago today?

On March 9, 2003, Friedman continued to express qualms about how well the Bush team would execute their plans after they went to war but continued to insist:  "Regime change in Iraq is the right choice for Iraq, for the Middle East and for the world. Mr. Bush is right about that."  He repeated that Iraq was a war of choice, not necessity, but added that it was "a legitimate choice to preserve the credibility of the U.N., which Saddam has defied for 12 years, and to destroy his tyranny and replace it with a decent regime that could drive reform in the Arab/Muslim world. That's the real case." So: Suck on that!

Equally revealing, a week earlier, he had written as openers of his column:  "Watching this Iraq story unfold, all I can say is this: If this were not about my own country, my own kids and my own planet, I'd pop some popcorn, pull up a chair and pay good money just to see how this drama unfolds."   Fun!   He then disclosed that he had a "mixed marriage" when it came to the conflict:


My wife opposes this war, but something in Mr. Bush's audacious shake of the dice appeals to me. He summed it up well in his speech last week: ''A liberated Iraq can show the power of freedom to transform that vital region by bringing hope and progress into the lives of millions. America's interest in security and America's belief in liberty both lead in the same direction -- to a free and peaceful Iraq.''

But Friedman at least was half-right for a change: "And so I am terribly worried that Mr. Bush has told us the right thing to do, but won't be able to do it right."

Greg Mitchell is author of more than a dozen books, including one on the media and Iraq, titled, "So Wrong for So Long."
Posted by Greg Mitchell at 11:30:00 AM

"something in Mr. Bush's audacious shake of the dice appeals to me"

something in Mr. Bush's audacious shake of the dice appeals to me

"Every ten years or so, the United States needs to pick up some small crappy little country and throw it against the wall, just to show the world we mean business." ~ Jonah Goldberg relayed his view of the 'Michael Ledeen Doctrine' on April 23, 2002.

Conservatives have small wieners, but to prove they are massively endowed they are more than willing to send any number of poor kids to kill foreigners.

As for why my sorry a** isn't in the kill zone, lots of people think this is a searingly pertinent question. No answer I could give -- I'm 35 years old, my family couldn't afford the lost income, I have a baby daughter, my a** is, er, sorry, are a few -- ever seem to suffice. Jonah Goldberg

Tom Friedman never once had the concern he might go onto a battle field in Iraq. He never once hesitated to cheer for the Iraq war from his insulated sinecure at the NYT. Friedman should have been fired long ago for his horrifically wrong positions on the war and his heartless comments like "suck on it". Yet, he knew he was never in danger of losing his job. He, like Judith Miller, was doing the bidding of even more powerful people than the editors who employed him. He was doing the bidding of the Israelis who wanted Saddam gone and used the US military to do their fighting. Friedman simply penned what the truly powerful people in the world wanted. TF is a tool and a wanker. Atrios coined the phrase "the Friedman Unit" (a period of six months in which the Iraq war would either be won or we'd withdraw) and also dubbed him "Wanker of the Decade". That is too kind. Tommy "Suck on It" Friedman has on his hands the blood of countless Iraqi civilians and American soldiers. He was always certain of his place in the "debate" about going to war. The decision to go to war was a fait accompli and Friedman knew it. He got paid handsomely to pose as the "intellectual" who could at once lay claim to some degree of liberalism while giddily proving he was a hawk when it came to bad, bad Saddam. He was a little spoiled brat playing a video game. He could make explosion sounds with his mouth as he gleefully blew up the enemy. The real blood, the real horror, the real hell was half a world away from The Big Apple. Then, his mommy would call him to supper and his "veal pen" life would continue in its charmed, safe way. Tommy "Friedman Unit" Friedman will go down in history as a hack, a sell out and a coward. One might think that would concern him. One would be wrong.

Drink! I need a notherr Drink!@

But it does inspire in me the desire for a competition; can anyone, particularly the rather more Bush-friendly recent arrivals to the board, give me one single example of something with the following three characteristics:

* It is a policy initiative of the current Bush administration
* It was significant enough in scale that I'd have heard of it (at a pinch, that I should have heard of it)
* It wasn't in some important way completely f---ed up during the execution.

According to treaties to which the United States is signatory wars of choice are by definition war crimes. For some reason this point is rarely mentioned when evaluating the Iraqi war.