As Obama Agrees to Go Hiroshima: A Protest Letter for Another President

Earlier I published an excerpt from my new book, Hollywood Bomb: The Unmaking of 'The Most Important' Movie Ever Made, on Ayn Rand writing a rival pro-nuclear script for a rival studio.  Here's another excerpt, about what happened after President Truman objected to a scene in the MGM film on The Bomb, and ordered revisions. 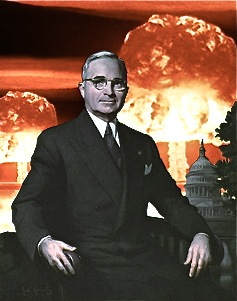 A bizarre, and revealing, postscript to President Truman's involvement with The Beginning or the End was provided by Roman Bohnen, the actor who portrayed Truman in the original sequences. Bohnen, a 51-year-old character actor, had appeared in such well-known movies as Of Mice and Men, The Song of Bernadette, and A Bell for Adano.

Learning of the need for a re-take, following the White House critiques, Bohnen on December 2, 1946, wrote the President a polite, but slyly critical letter.   He noted the President's concerns about the depiction of his decision to “send the atom bomb thundering into this troubled world,”  adding that he could "well imagine the emotional torture you must have experienced in giving that fateful order, torture not only then, but now—perhaps even more so."  So he could “understand your wish that the scene be re-filmed in order to do fuller justice to your anguished deliberation in that historic moment.”

Then he offered a suggestion. People would be talking about his decision for a hundred years, he observed, "and posterity is quite apt to be a little rough" on Truman "for not having ordered that very first atomic bomb to be dropped outside of Hiroshima [his emphasis]with other bombs poised to follow, but praise God never to be used."

His suggestion: Truman should play himself in the film! If he believed in his decision so strongly why not re-enact it himself?

"If I were in your difficult position," Bohnen wrote, "I would insist on so doing. Unprecedented, yes--but so is the entire circumstance, including the unholy power of that monopoly weapon." Perhaps to show that he was serious about all this, Bohnen indicated that he was sending a copy of the letter to Louis B. Mayer.

Ten days later, Truman responded warmly, apparently missing (or ignoring) Bohnen's sarcasm. He thanked the actor for his suggestion that he play himself but admitted that he didn't have "the talent to be a movie star" and expressed confidence that Bohnen would do him justice. Truman then took time to defend in some detail the decision to use the bomb, revealing much more about his emotional attitude than he usually did.

The President explained that what he had objected to in the film was that it pictured his decision as a "snap judgment," while in reality "it was anything but that." After the weapon was tested, and the Japanese given "ample warning," the bomb was used against two cities "devoted almost exclusively to the manufacturer of ammunition and weapons of destruction."  (A complete lie.)

“I have no qualms about it whatever for the simple reason that it was believed the dropping of not more than two of these bombs would bring the war to a close. The Japanese in their conduct of the war had been vicious and cruel savages and I came to the conclusion that if two hundred and fifty thousand young Americans could be saved from slaughter the bomb should be dropped, and it was.

"As I said before," Truman concluded, "the only objection to the film was that I was made to appear as if no consideration had been given to the effects of the result of dropping the bomb—that is an absolutely wrong impression."  There is nothing on the historical record, or in Truman’s letters and diaries, however, to indicate that he did give strong consideration to the human toll in the Japanese cities, the release of radiation--or letting the nuclear genie out of the bottle.

For whatever reason, MGM replaced Bohnen in the re-takes with a slightly younger actor, who was instructed to portray Truman with more of a "military bearing" (a revealing suggestion in itself). Did Truman or someone at the White House demand that Bohnen be replaced after reading his note to Truman?  (This seems likely.) Did Louis B. Mayer drop him after seeing a copy of the letter sent to him by Bohnen?  Or did a conflicted Bohnen simply quit?

In any event, when The Beginning or the End was finally readied for release, the actor playing the President in the pivotal scene was Art Baker, who portrays the peppy, salt-of-the-earth Truman as magisterial and aristocratic: in other words, as a worthy successor to Franklin Roosevelt.  Baker wrote to Charlie Ross on January 7, 1947, revealing that he’d been picked to play the president in the re-take—and then expressing warm feelings for Truman.

For much more, see Hollywood Bomb.
Posted by Greg Mitchell at 9:55:00 AM

This is quite funny letter seriously it can be more better. Like office manager cover letter would have all kind of its details and regulations.

Unknown said...
This comment has been removed by the author.
Wednesday, July 11, 2018

These two people are here for some kind of issue and they do a various terrible thing which isn't advantageous for them. In any case, this time deputy snare is here to check this two http://www.resume2016.com/the-list-of-resume-keywords-2016/ suspects and their bad behavior. The desire they get a shield at a time if they find exculpating.

When we consider the truant of one person then we feel smidgen agitate. Since he is the main person with whom we share all sort of talks and he, for the most part, rectify me in my http://www.sopreview.com/how-we-provide-best-sop-revision/. And furthermore give me an exhort which is unsurpassed bravo and I additionally take after this.