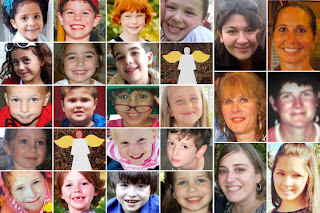 Update:  Report, 44 pages,  release comes at 3 p.m.  Read the whole thing here.  For one thing, they have ruled out any prosecutions and consider case closed.  Findings:  Adam Lanza acted alone.  No clear reason why he did it and why Sandy Hook.   He did have significant mental health problems but no clear cause-and-effect--although he did fail to take certain medication or attend prescribed therapy.  Also: he had "obsession" with mass murders, especially Columbine--and "access to firearms."

Amazing fact: autopsy found he was six feet tall--but weighed only 112 pounds. In final weeks he would only talk to his mother via email--though they lived in the same house and he never went out.  Had phobia about staying in hotels and would not leave house even when power and heat out after Hurricane Sandy.  Would not allow a cat or Christmas tree, and no one allowed in his room, even to clean.

Also he was interested in a game--yes, this exists--titled "School Shooter" where, the report says, you could enter a school and shoot kids--with same weapons used by your favorite school gunman.   See details and  video on it here.  Apparently it's been withdrawn.  But he seemed most interested in the game "Dance, Dance, Revolution."  And there's a new online game where you can re-enact the Newtown shootings, which had drawn the ire of the victims' families.

All guns were purchased legally by mother.  Police arrived in four minutes.  No criticism of police work.  Overall:  report is heavily redacted, few new details, and media have long complained about secrecy.

Found on his hard drive (where he destroyed nearly everything) or in bookmarks:  "images of hamsters" and "images of Lego creations."

Earlier:  We will finally get a "summary" report of the official probe into the Sandy Hook school shootings (and Adam Lanza's mom)  last year--but the full report still held back as well as much evidence gathered by police and 911 calls, which are routinely released long ago.   "Dan Klau, a Hartford attorney who specializes in First Amendment law, said the decision to release a summary report before the full evidence file is a reversal of standard practice and one of the most unusual elements of the investigation."

Hartford Courant with fresh reasons to think Lanza was acting as a first-person-shooter video gamer.
Posted by Greg Mitchell at 3:00:00 PM