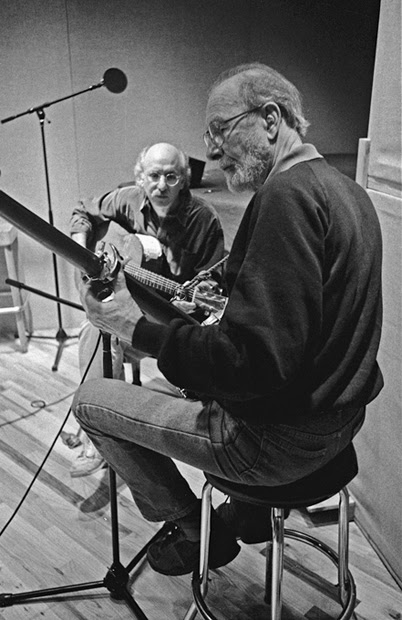 As recounted by Peter Yarrow of Peter, Paul and Mary, who had just flown in from Ramallah.  Posted on Facebook.  Photo left by Robert Corwin.
***
I had the privilege and honor to be with Pete this past Monday, not long before he finally passed. I came directly to his hospital room from the airport where I’d arrived from Tel Aviv, having just sung a couple of Pete’s songs the night before (“If I Had a Hammer” and “We Shall Overcome”) in a meeting with folks involved in efforts to advance the peace process in the Middle East. The magic of Pete’s songs, as frequently occurs, had a remarkable effect. When the discussion stopped and the music began that night in Ramallah, the spirit in the room changed; “positive” and “enthusiastic” replaced “not so sure” as we created a concrete plan that - who knows? one can always hope - might play a small part in, at last, bringing about a successful peace process.

I was not sure how much Pete understood my words but, nevertheless, by his bedside I told him about the previous night’s events before singing “We Shall Overcome” with his family and friends assembled. This song was shared close to the end of what was almost an hour and a half of remarkable singing at Pete’s bedside. Pete’s daughter Tinya, Pete’s grandson Kitama, other relatives, as well as beloved allies and friends - many who worked with Pete for years on the amazing Clearwater Sloop effort - sang together.

When I had first entered Pete’s room, I had quickly unpacked my guitar and then waited for the loveliest of songs to be finished by one of Pete’s extended family. Then I started to sing a subdued but still gently defiant (if that be possible) version of “We Shall Not Be Moved”. We all crowded around Pete, singing this old Union Song together, with friends on each side of the bed holding his hands. We sang that song for perhaps 7 or 8 minutes, with many verses about “young and old together”, “black and white together”, “gay and straight together”, “the union is behind us”, “no more poison fracking”, on and on.

Slowly the strength and beauty of the singing began to carry us all with it as we felt each other’s hearts unite, all of us singing directly to Pete, and beginning to ride on the sweetness of the sound we were making together. Everyone there was a really good singer and picker and everyone was wordlessly agreeing which song would come next, who would take a verse and how to sing a bit more passionately for a moment and then bring down the energy the next.

For me, it was precisely like some of the most wonderful moments I'd had with Noel Paul Stookey and Mary Travers when we felt so close and so intuitive that we fairly sailed together, enveloped in a beautiful gliding spirit that was no one’s and everyone’s doing. Honestly, it was more beautiful and peaceful, loving and joyous, (yes and tearful and, yes, reverent) than I can adequately describe.

A number of Pete’s Sloop songs were led by others, and I included “Oh. Freedom”, “Down By the Riverside”, “Talking Union” and “Union Maid” (we got most of the lyrics thanks to others’ memories filling in), a memorable version of “Where Have All the Flowers Gone”, and even a passionate yet gentle version of “If I Had a Hammer”.

I wanted to tell Pete about singing “No Easy Walk to Freedom” with Noel Paul and Bethany & Rufus at the memorial for Nelson Mandela at the National Cathedral in Washington, DC a few weeks before.  Lots of history, I know, but when we sang the song for Pete, having shared the above, I felt I was telling Pete, “See? We are all carrying it on in your footsteps, dear and beloved Pete, our mentor, our father (figure) to some like me (though he didn’t know it), our path blazer and brave leader.” “No Easy Walk”, as we sang it, was joyous, still subdued as was appropriate, but passionate. It was a great moment for me.

Some of us shared brief anecdotes with Pete prior to singing the songs. Also, it seemed that Pete was trying to sing along on some tunes, particularly on Woody’s “This Land Is Your Land”, despite the oxygen plastic cup covering his mouth and resting on his neck. When he raised his head and stretched his neck, it looked that way, though he might have been just reaching for more oxygen. I really don’t know, but there was no doubt, and it seemed clear, that Pete was really listening and enjoying the music lots and lots. Kitama later emailed me, “I am confident he knew who you were and recognized the songs.”

Pete’s wish, as Kitama had told me when he texted me “bring your guitar” to the hospital, was that he be surrounded by music in such a circumstance if it were to occur, and for about an hour and a half of true joy and some tears (of course), a great spiritual force filled the room and all our hearts.

Some of us said, “I love you” to Pete, as did I when I kissed his forehead before I left. “You’ve been my inspiration my whole life”, I said, and then remembering that at some point I was only 6 months old, I added “at least, most of my life”. I packed my guitar and left, noting that I’d be back the next day to sing once more, which did not, of course, come to pass.

I left feeling really peaceful and complete, with a feeling that Pete was, as he has always been, deep inside me. I also knew, though Pete would have been shy to acknowledge it, that there are thousands of (as Mary called our trio) “Seeger’s Raiders” who will carry on with Pete in their hearts, sharing the great gift of his music and his truly giving, uncompromising, pure spirit still resonating within us all.

As Arlo has so aptly said to Pete, in his imagined conversation, “See you soon” - and indeed I do, and shall, for the rest of my life.
Posted by Greg Mitchell at 9:40:00 PM

Pete inspired me to have musical heroes. You are one of them. Thanks for bringing me int that room with your words, good sir.

What a wonderful story about the passing of a wonderful human. I've been forutate to see Pete twice, and his passion and humanity were his gifts to everyone whom he played to. I could go on and on about this man, but to sum it all up: we will never see the likes of him again. Peace Pete and thank you.

What a wonderful story about the passing of a wonderful human. I've been forutate to see Pete twice, and his passion and humanity were his gifts to everyone whom he played to. I could go on and on about this man, but to sum it all up: we will never see the likes of him again. Peace Pete and thank you.