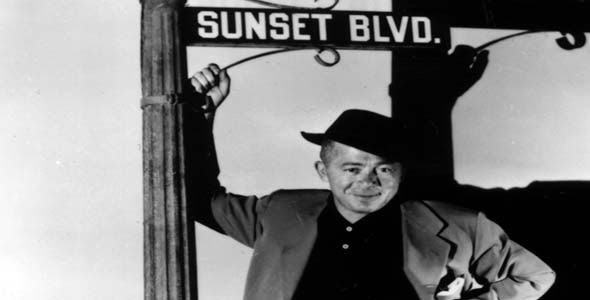 My new ebook, When Hollywood Turned Left, was published this week.  Derived from my earlier The Campaign of the Century (which won the Goldsmith Book Prize), with new material, it focuses on the wild response in Hollywood--then controlled by conservative Republicans--to leftwing author Upton Sinclair winning the Democratic primary for governor, leading a mass movement, in 1934.  This included the creation of the first use of the screen for "attack ads"--thanks to MGM's Irving Thalberg.  The rightwing attack was so outrageous it sparked liberals out there to organize and Hollywood has titled left ever since.

Here's an excerpt re: one of the most notorious aspects--almost all the studio chiefs docked their employees, from low-level to top stars, one day's pay to go for the slush fund of the Republican candidate, Frank Merriam.  One of those who tried to protest was the young screenwriter Billy Wilder, who had arrived in the U.S. just recently.  I interviewed Wilder a couple of times for this.
*
Stars in the studio system like Hackett and Cagney enjoyed certain
privileges. The studio bosses at least asked them to donate to the Mer-
riam fund before threatening to dock them. Some writers, such as Don-
ald Ogden Stewart, went along with the request. Less established figures
were given no choice in the matter.

Take the young writer Billy Wilder over at the Fox studio, for exam-
ple. Wilder, who was still trying to salvage Raoul Walsh's “East River,”
received his latest paycheck, normally $250, only to find $50 missing.

"There's something wrong," Billy said to the studio cashier in his
heavily accented English. "There's been a mistake."

"There was no mistake," she replied. "They took fifty dollars from
everyone to give to Governor Merriam. If you have any complaints, talk
to Mr. Sheehan."

Billy didn't know what this was all about, but he knew one thing: he
desperately needed that fifty dollars to make the rent on his tiny room
at the Chateau Marmont and to pay for his English lessons. He was
behind on payments on his '28 De Soto, too. In no position to approach
Winnie Sheehan, Fox's top man, he cornered another studio exec in-
stead.

"Will you please explain?" Wilder asked. "I'm just here on a visa, I'm
not interested in politics."

"Sinclair is dangerous," the executive replied, "he must be defeated.
The Communists want to take over."

"Shouldn't I have the privilege of making the donation myself?" Billy
asked innocently.

"No, the house is burning down," the exec said, "and we need as
much water as possible to put it out. That son of a bitch bolshevik
Sinclair must be stopped."

"And my hard-earned fifty dollars is going to stop him?" Wilder
wondered.

Billy was aghast. It seemed childish, foolish, and incipiently fascist at
the same time. And he knew something about fascism. He went back
to his office and asked his colleagues, red-blooded Americans all, what
he should do. After all, he was just a hick from Austria and unwise to
the ways of American politics. This just didn't seem like the American
way, as he understood it.

They said, "It had to be done," and "There's nothing you can do."
You can't fight city hall, and all that. Some of them agreed that Sinclair
was a Communist. Wilder said he knew a little bit about Sinclair and
he was not by any means a Communist.

"Oh, you're a Communist too?" one writer replied. "You better
watch it."

Wilder was out of fifty dollars and left with two conflicting thoughts
concerning the forced donations. One was: It may not be democratic, but
it's a brilliant idea. Maybe if businessmen in Germany had deducted fifty
marks from their workers to stop Hitler, Europe would be a safer place
today.

The other was: I fled fascism for THIS?
Posted by Greg Mitchell at 9:53:00 AM