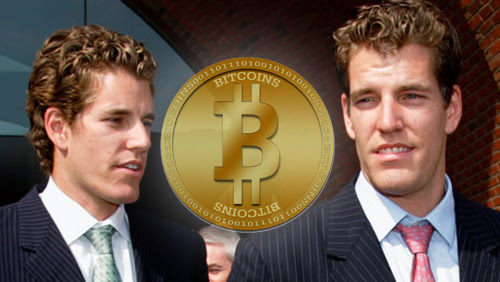 Now that the Winklevii twins of Facebook fame have paid in bitcoin to secure their reservations on Sir Richard Branson's Virgin Galactic (announced on their web site for Winklevoss Capital, where Tyler Winklevoss asserts that bitcoin and Virgin Galactic "are two technologies that meaningfully represent our focus at Winklevoss Capital: the reduction of pain-points and friction in an effort to build a better world" ), you may be wondering if you can really continue to avoid understanding what the hell a bitcoin is.

Fortunately, the indispensable Consumerist web site has taken on the task of explaining the cryptocurrency in all its mind-numbing complexity, and they even include fun stuff, such as the novelty version, Coinye West, which is sadly now defunct.

The Ars Technica site today reports that Rep. Jared Polis (D- CO ) has written a tongue-in-cheek response to last month's proposal by Sen.  Joe Manchin (D-WVA)  that federal regulators should ban bitcoins before Americans are "left holding the bag on a valueless currency."  Polis asserts in his letter that the use of dollar bills should also be limited, because "dollar bills are present in nearly all major drug busts in the United States and many abroad," and thus also require urgent regulatory attention. A spokesperson for the senator said the satirical letter is meant only to "move the serious debate forward" about bit coins.

Senator Manchin's office had not yet responded to Ars' request for comment. --Barbara Bedway
Posted by Greg Mitchell at 4:51:00 PM