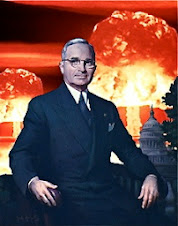 Every year at this time, I trace the final days leading up to the first (and so far only) use of the atomic bomb against cities, Hiroshima and Nagasaki, Japan, in August 1945.  This is a subject that I have studied and written about in hundreds of articles and three books with a special emphasis on the aftermath of the bombings, and the government and media suppression in the decades after.
Yesterday's entry.  See my new book, The Beginning or the End: How Hollywood--and America--Learned to Stop Worrying and Love the Bomb.

July 23, 1945:  More decoded cables and reports suggest Japanese might very well surrender soon if "unconditional surrender" demand is amended to allow them to retain their Emperor as symbolic leader.  Some top Truman advisers, including Secretary of War Henry L. Stimson have floated this idea to no avail.   U.S. will rule that out in its upcoming Potsdam Declaration--but then allow it, after using the bomb. If granted earlier would that have meant quick surrender and no use of A-bomb?

Truman had come to Potsdam mainly to get the Russians to keep their promise of entering war against Japan in early August--and Truman believed, as he wrote in his diary, that alone would mean "fini Japs" even without using the bomb.  But, after the successful Trinity, Stimson writes in diary today, that he and Gen. George Marshall believe "now with our new weapon we would not need the assistance of the Russians to conquer Japan."  So he again presses for info on earliest possible date for use of bomb.

So the bomb would be useful--even if not, perhaps, necessary.

Out in the Pacific, the first bomb unit, without explosives, dropped in a test at Tinian.

Meanwhile, 600 bombers get ready to bomb the hell out of Osaka and Nagoya without conventional weapons.
Posted by Greg Mitchell at 1:00:00 AM