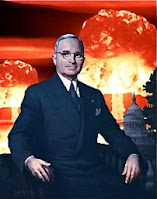 Every year at this time, I trace the final days leading up to the first (and so far only) use of the atomic bomb against cities, Hiroshima and Nagasaki, Japan, in August 1945.  This is a subject that I have studied and written about in hundreds of articles and three books. since the early 1980s with a special emphasis on the aftermath of the bombings, and the government and media suppression in the decades after.  See my latest book, The Beginning or the End: How Hollywood--and America--Learned to Stop Worrying and Love the Bomb.

July 21,  1945:  Gen. Leslie Groves' dramatic report on the Trinity test lands on Secretary of War Henry Stimson's desk.  Residents of New Mexico and Las Vegas, who witnessed a flash in the desert (some received radiation doses) are still in the dark.

The Interim Committee has settled on a target list (in order):  Hiroshima, Kokura, Nagasaki.  Top priority was they must be among the few large Japanese cities not already devastated by bombardments--so the true effects of the new bomb can be observed.   That's also why the bomb will be dropped over the very center of the cities, which will also maximize civilian casualties.  Hiroshima has the added "benefit" or being surrounding by hills on three sides, providing a "focusing effect" which will bounce the blast back on the city, killing even more.  Kyoto, on the original target list, was dropped after an appeal by Stimson, who loved the historic and beautiful city.

Stimson in his diary recounts visit with Truman at Potsdam after they've both read Gen. Groves account of the successful Trinity test.  He finds Truman tremendously "pepped up" by it with "new confidence."  This "Trinity power surge" (in Robert Lifton's phrase) helped push Truman to use the new weapon as soon as possible without further reflection,  with the Russians due to enter the war around August 7.  Truman has not yet told Stalin about existence of the bomb.

Note: Groves' lengthy memo generally pooh-poohed radiation effects on nearby populations but did include this:  "Radioactive material in small quantities was located as much as 120 miles away. The measurements are being continued in order to have adequate data with which to protect the Government's interests in case of future claims. For a few hours I was none too comfortable with the situation."