I'm sure we are shocked that chief NYT stenographer Jodi Rudoren in her amused--rather than appalled--piece tonight on Israelis who take to a hill to enjoy deadly air strikes on Gaza civilians makes this slanderous error:  She claims that the CNN reporter got "pulled from her post last week after she used the word 'scum' in a Twitter post to describe Israelis on the hill who she said cheered airstrikes on Gaza and threatened to destroy her car."   In fact, her tweet clearly referred to just those threatening her vehicle.   A CNN spokesman explained, "She deeply regrets the language used, which was aimed directly at those who had been targeting our crew."  I'm sure a correction will be coming?

Arab reporter for BBC physically attacked on-air in Israel, by an Israeli, while called "son of a whore."  Update: Wash Post covers it, bravo, but, in a classic headline says attack took place "outside Gaza" rather than "in Israel."  So revealing.

NYT's fine public ed. gets to criticism of paper's Gaza/Israel coverage but mainly it's new top editor Dean Baquet defending and explaining.  Most of the criticism, to judge wrongly by this column, comes from the pro-Israel side.  Baquet claims, “There is zero politics involved."  And that he trusts reporters on the ground who are there--fine, except that the two in the Jerusalem bureau have long displayed pro-Israel bias, in the extreme.  To judge from this column, one of the main issues is not enough photos of Hamas fighters in the tunnels!   Weak, but she tells me she will be doing more. 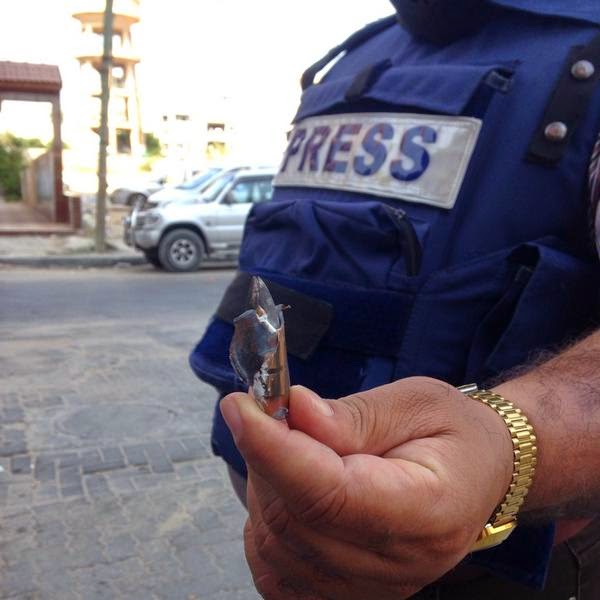 Gunshots fired into Al Jazeera's bureau in Gaza day after Israel threatened to shut them down, but source unknown.  AP had evacuated building.  Al Jazeera claim it was Israeli shooter and bureau chief displays one of the rounds, left.

That young man in now-famous video murdered by sniper in Gaza? Family found out he died--via the video.

Two days after their official denied "categorically" that there were no missing or captured soldiers in Gaza, Israel now admits that's not true. And the name matches the very one Hamas had claimed over the weekend.

Isabel Kershner, the second member of the Times' Jerusalem-based stenography pool, continues to downplay the civilian death toll in Gaza, suggesting only that "many" have died.  Others place total at about 3/4s of the 604 killed there so far.   But Anne Barnard, who is from the Beirut bureau and has reported from Gaza, does separate piece raising more questions about the Israeli targeting.  Closes: "At the house next door, a little girl, seeing journalists approach in flak jackets, sat on a stoop, put her face in her hands and wept."

MSNBC contributor who complained about their pro-Israel bias on-air says future appearances have been axed.

Jon Stewart had the nerve to offer some brief, modest criticism of Israel's attacks on civilians last week--and got all kinds of flak, naturally.  So last night he did this:

They're lopsided on more than Isreal, having convenient memory loss of our CIA chief flying into Kiev just after the coup in Ukraine as they parrot the White House line on Putin as the source and sole sponsor of unrest.

Even as a free read (their pay wall is easily defeated) there are better places to gather information.