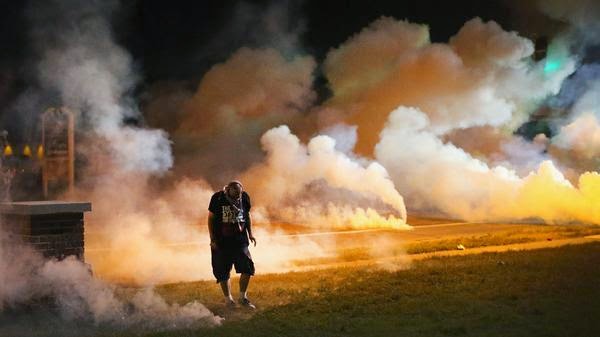 Obama at 12:50 P.M. makes live statement on Ferguson: Says got update today from Atty Gen Holder, and had already asked FBI to probe death of Brown.  Just spoke to Gov. Jay Nixon, expressed "concern" about "violent turn."   Nixon is a "good man and fine governor" and now going to Ferguson.  Says police need to be "open and transparent" about investigation. But "never an excuse" for vandalism or for police to "throw protesters in jail" without cause and ditto on journalists. "Here in the United States, police should not be bullying or arresting journalists who are doing their jobs." Now is time for "healing."

Waiting for St. Louis police to claim that Michael Brown killed by Hamas rocket that fell short.  Media often go for that.

Joe Scarborough suggested this morning that the two reporters got arrested because they just wanted to be on TV.  One of them responds angrily, don't miss.   Suggests Joe put down his coffee cup and come to Ferguson.  "Instead of getting more reporters on the ground we have people like Joe Scarborough who are running their mouths and have no idea what they’re talking about."

Before he was arrested, for no good reason, in a McDonald's in Ferguson, MO, last night, Wash Post reporter Wesley Lowery co-authored this piece on the city's police (nearly all-white in 2/3s black city) and being cited for high-level of racial profiling recently.  "And late last year, the state chapter of the NAACP filed a federal complaint against the St. Louis County police department, whose officers are now assisting Ferguson’s force since the shooting, over racial disparities in traffic stops, arrests and other actions."
Posted by Greg Mitchell at 1:00:00 PM