Tuesday Updates (From the Top) on Ferguson Crisis 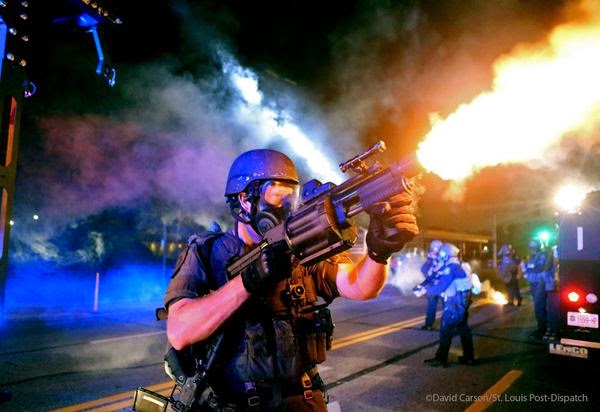 8:00  Not sure why media and most locals seem okay with shooting of the young man with knife near Ferguson, trusting police account.  Indeed, the account itself may be mainly accurate but the fact remains, the dead man was known to have severe mental issues and even with knife was there no other option for two cops, such as tasering or momentary retreat.  Chris Hayes among those who seem thrilled that the police chief there waded into crowd to take questions--but that doesn't mean the shooting itself was fully warranted.  Just asking.  This young man was just five years older than Mike Brown--and allegedly mentally impaired.  Earlier Hayes had tweeted:   "People here not disputing the knife, but all asking 'why not shoot him in the leg?'  'I thought they were supposed to have training'"

4:51 Some people are making hay over records for last night's arrests revealing that contrary to media (and Capt. Ron Johnson) claims, the vast majority of those jailed are indeed locals.  Well, it depends how you define local.  Only a tiny number hail from Ferguson itself, with most of the rest from towns scattered around the large county or in the city of  St. Louis.  So little stake in Ferguson itself.

4:40 p.m.  State Sen. Jamilah Nasheed  on MSNBC just now said new move to recall Ferguson mayor as he does not represent community--not African-Republican and even a Republican.   Also calls for local prosecutor to recuse himself as "first step" to calm.


2:40 p.m.  And now, just 4 miles from Ferguson, another man shot and killed by a police officer--this time he was allegedly brandishing a knife outside a store (possible robbery) which he refused to put down.  Area, on edge from Ferguson, now sees people in that neighborhood on street buzzing about it and putting hands up and saying "don't shoot."   @AntonioFrench tweets:  "We've had an officer involved shooting in St. Louis City. Here at the scene to keep the crowd calm & find out exactly what happened."

Presser now with police chief.  Suspect "acting erratically" and "did not respond to verbal commands to drop weapon."  Came within 3 or 4 feet of officers in car so two ore maybe more shot.  Asked if officers have tasers, he said some do.  Will check to see if store video.  Says officers should have expectation of living and "going home" at night (says this twice).  Knife allegedly found.  No count of shots fired. An alderwoman witnessed. Allegedly man said "shoot me, kill me," though also then attacked cops.  Says some have claimed it was "suicide by cop."

Update:  Police now ID him as black man, age 23. He had taken two energy drinks and pastries from the shop and was outside, pacing.  Cops arrived and when he displayed knife and approached they shot him from the car. No further word on taser option. @AntonioFrench urging calm, saying "St. Louis not Ferguson," and State Sen. Nasheed does the same.

9:15 a.m. Capt. Ron Johnson just now on MSNBC claims police came under "heavy gunfire."  By "element of criminals." Shooting came from behind bushes near homes and behind buildings.  Johnson says most journalists have done good job but strongly blames them for some of trouble and claims they have "swarmed around" the criminals--IDed because they are wearing masks, he says--which then draws crowd, and then sheltered by numbers the bad guys start throwing things. Of course, one problem--many wearing somethig over faces due to tear gas.  Johnson said they had new plan today but all it is, it seems, is to get peaceful protesters to go home at dusk. Fat chance?

Another journalist arrested, Ryan Defereaux of The Intercept, see their statement.  "But needless to say, it’s an outrage that he was stopped and handcuffed by police in the course of lawfully doing his job on the streets of Ferguson. We are trying to contact Ryan now."

NYT with its update on the confrontations overnight.  Many of the late arrests--as viewed on live TV--seemed to be more civil disobedience, protesters standing and waiting to get busted.  Chris Hayes and Jake Tapper and others viewed live as tear gas hit journalists badly.