The Real 'Shock and Awe' 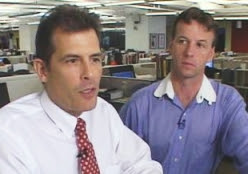 I see from Facebook post last night from my friend Joe Galloway that Rob Reiner and his Castle Rock unit is preparing new film focusing on the four Knight Ridder (now McClatchy) reporters/editors, including Joe plus Landay, Strobel and Walcott, now recognized as the outliers in 2002-2003 in raising serious questions about Saddam's WMDs in Iraq.  Of course, I covered them all closely--also a rarity at the time--and published several of Joe's columns when I edited Editor & Publisher (where we won several national awards for this) and then in my book, where they are heroes, So Wrong for So Long.  Here's a clip of me with Landay and Walcott on Moyers show a little later.  Landay and Strobel above.
Posted by Greg Mitchell at 9:44:00 AM