When I Wrote a Book at Springsteen's House 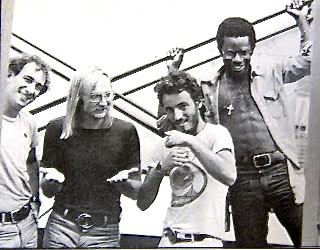 There has been, and will be in the following week, a flood of new stories about Bruce Springsteen tied to the publication of his first memoir, not to mention reviews and Best Songs lists, so I might as well add another one of my own.  I've already posted a bit, even created a little video, about how I met him in Sing Sing Prison and then helped create the first magazine piece about him for Crawdaddy in late 1972 (before the first album).  More recently, I caught his concert in Berlin this past June, with tickets from management.  In between he wrote the preface for my 2008 book on the media and Iraq, So Wrong for So Long.  And more.  That's a photo of me (left)  backstage with Bruce, band mate David Sancious and Crawdaddy editor Peter Knobler in Central Park in, I think, 1974.  What?  I was the only one with longish hair? But here's-an episode I haven't written about before.

In the autumn of 1975, after his triumphant week at the Bottom Line in NYC, his first ever magazine cover (again Crawdaddy) and then the fabled dueling Time and Newsweek covers, Bruce got ready to leave for the UK and his first really big tour there.  I happened to be visiting him in Jersey just before that, at a time I was trying to write my first novel.  It occurred to me that maybe there was a match here:  I needed an isolated place to exit Crawdaddy for a couple of weeks and write a massive chunk of the book, and he might (especially with his new fame) appreciate someone housesitting for much of his time abroad.  So I asked, and he said sure.

He left for London; I got a ride to his first real house, on a hill in (I think) Atlantic Highlands, overlooking the water that separates that part of Jersey and New York.  Nice view.  It was a compact two-level house with a big deck and, best of all, a little cabin off in the woods, unheated, and with a desk and chair, where I could write (even though I could be just as isolated in the house) on my portable Olympic typewriter.  Max Weinburg had a girlfriend, Karen, living a few hundred feet away as the nearest neighbor, and  we hung out a couple of times.  Southside Johnny and then-wife Betty (aka "Mrs. Southside") came by two or three times and that was it for fun.  To keep up with the outside world, I could watch the news on Bruce's 10-inch TV which he kept next to his bed.  One of the assassination attempts on President Ford happened then--Sarah Jane Moore or Squeaky Fromme, I don't recall which.

What else do I recall?  Had to laugh at finding the only dishes or utensils in the house were one small bowl and one fork.  The only food, until I managed to get some more,  was a box of cereal and some milk.  I take it Bruce ate his cereal with a fork?  Also there was a rhyming dictionary on a table.  Bruce wasn't too proud to leave that out and probably was about to lay it aside for good.  Oh, there was a dart board in the little writer's shack which got a real work out in those two weeks.

When it was over, I had written a couple of hundred pages of the book.  I thought it was quite good.  It never found a publisher.  Bruce returned, wrote Darkness on the Edge of Town, moved to another house, and, well, you know the kid has done okay since.
Posted by Greg Mitchell at 9:31:00 PM