Trump at the Lincoln Memorial 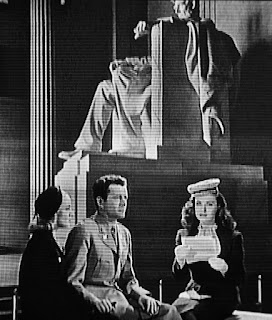 Yesterday President Trump sat down with Fox and his friends, seated in front of Honest Abe in Washington.  A highlight was the president claiming that he had been treated more harshly  by critics than the assassinated Lincoln.  But this also served to remind us of others who have invoked, or arranged photo ops, with Lincoln to bless their own message.  Surely way down the list of important examples, though of particular interest for me, was the finale of the epic 1947 MGM drama that is the subject of, and lends its title to, my new book coming in July, The Beginning or the End.  (Read all about it here.)

In a nutshell, and I do mean nut:  a fictional, young atomic scientist with the Manhattan Project named Matt Cochran (Tom Drake), has been a stand-in throughout the movie for those bomb creators who suffered ethical or moral qualms about making, and then dropping two atomic bombs over Japanese cities.  The movie, in fact, was inspired by these concerns of the scientists, but then turned into pro-bomb propaganda once the Pentagon and President Truman ordered massive revisions and even re-takes.  Truman even got the actor playing him fired.   By the end, only Cochran is left standing with any doubts, but then he suffers a fatal radiation accident while saving the lives of maybe thousands of his comrades--truly a martyr to the bomb.

In any case, the ending for the film, practically under orders from Washington, had to be re-written to show that even though the bomb killed him he had come to his senses!  His best friend Col. Jeff Nixon (Robert Walker) brings his wife to the Lincoln Memorial with Abe looming large behind them to tell her about Matt's death--and to deliver the letter he wrote to her as he perished.  In it he confesses that suddenly he realizes that, actually, nuclear energy will be a savior of mankind, helping us create a "utopia" on earth.  As his wife reads, Matt appears as a ghost to relate part of it himself. What about his worries about future nuclear wars?  No bother.  God would not have "given" man the ability to split the atom if there was much chance of that.