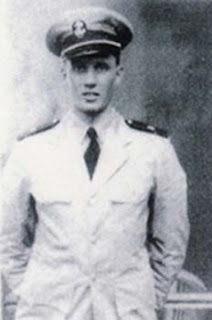 The deaths have been known for awhile but the reports still shock most people.  I've written about it for years. Few Americans know that among the tens of thousands victims in Hiroshima were at least a dozen and perhaps more American prisoners of war.

This was kept from the American people—even the families of the victims—for decades, along with so much else related to the atomic bombings (that's one victim, John Hantschel, at left).  One night,  as a pair screamed in pain in their cells—asking to be put out of their misery—the other Americans asked the Japanese doctors to do something. “Do something?” one of the doctors replied. “You tell me what to do. You caused this.” The two men died later that night.

Three days after the Hiroshima blast, perhaps as many as a dozen Dutch POWs were killed in the bombing of Nagasaki. One American soldier there, a Navajo from New Mexico, survived in his cell.


More on suppression of evidence from Hiroshima and Nagasaki in my new book The Beginning or the End:  How Hollywood--and America--Learned to Stop Worrying and Love the Bomb and earlier book Atomic Cover-up.

War has ALWAYS been a very Sad Fact in the Human Race. It's Hard to think that the truth of the droppings of 2 atomic Bombs on Japan Had saved more than two times more Human lives than what an invasion would have resulted in as Japan had NEVER SURRENDERED in it's entire History, and Japan would have fought on to the last child, as all Civilians were preparing for a Full Assault on their Country as well.The Bombs Forced their 1st and only Surrender in History. It would have been more than twice as sad if the bombs had never been dropped and a full scale invasion would have caused more than two times the death and casualties and destruction, than those two bombs had been able to.
SO SAD, BUT TRUE.

AS FAR AS THE P.O.W.s They were just considered a casualty of War. They as well as all the Japanese that were directly effected by these two Bombs, ALL should be honored as hero's to end a War that would have killed nearly everyone in the country. The Hero's (P.O.W.s AND Japanese gave their lives so the War would end without total destruction.

Really hate to contradict the official dogma that it saved more lives than it caused. Japan would of surrendered regardless and there is ample proof they would of surrendered in a months's time. Actually the SOVIET UNION was at the doorsteps of taking the Japanese Isles and the administration specifically Truman and the military command were not about to let that happen.

I'm afraid you're mistaken on several points... The Soviet Union completely lacked the sheer Naval and amphibious forces needed to pull off an invasion of the Japanese Home Islands. The surviving Japanese land forces _which were considerable_ would have countered anything the Soviets could have placed ashore quite handily.
Surrendered in a month's time? Members of the Emperor's own cabinet were ready to overthrow him over the issue of unconditional surrender. It finally took the horror of 2 nuclear weapons and the promise to preserve the authority of the Imperial thrown before the country finally surrendered. And a personal speech from the Emperor himself.
If you want to play revisionist history, pick a subject that is not so well documented.

While Hiroshima and Nagasaki indeed stand as lamentable pages in the world's history, few stop to wonder what would have happened had the bombs not been dropped. We know that the Japanese war effort had been crippled, but the defense of the Japanese homeland was tantamount, and there would have been no good way to approach it. Although the death tolls in these two cities were great, American military experts estimated that at least 50,000 Americans a month would have died in the first 3-4 months of an assault on Japan. Those experts estimated that it would have taken a year or more to subdue Japan. America was already weary of war at that point, and the nation had little taste for more deaths, particularly on that scale. The choice was like getting an eye exam; "Is it better there, or there?" Neither choice was very good...

There were other measures, other than a full scale invasion, or dropping an atomic bomb, that would have brought the war with Japan to a successful conclusion. Nothing can justify the willful murder of your own men along with innocent Japanese civilians.

What do you think we can get done here? Change history? It happened and the whole world learned a lot from it. all this talk about it is not going to change anything. We don't fight wars like they were in WWII. We don't drop bombs on civilians like we did back then. a lot has changed and we should just be happy changes were made. I don't know what this site wishes to accomplish. You should look up the two cities in Japan and see what they have become today. We didn't ask for that War. But they wanted one, so we gave them one.