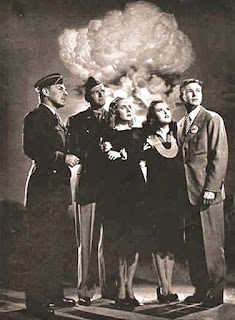 Just a short post here to announce my new book coming in early July, The Beginning or the End:  How Hollywood--and America--Learned to Stop Worrying and Love the Bomb,  from The New Press.  There's a brief write-up below from the catalog that will have to do for now.  This story has been, for me, over thirty years in the making.  The very positive first review, from Publishers Weekly, just appeared, and Library Journal now adds:  "This intriguing, behind-the-scenes look at a disjointed creative partnership is sure to be of interest to readers of history and cinema."

Here are the five "blurbs," from a leading authority on the bomb, Richard Rhodes, and best-selling authors Gary Krist, Nicholson Baker, Peter Biskind, and Alex Kershaw, and then the summary below that.  (You can pre-order here.)  See you again soon.

"This intriguing, behind-the-scenes look at a disjointed creative partnership is sure to be of interest to readers of history and cinema." --Library Journal