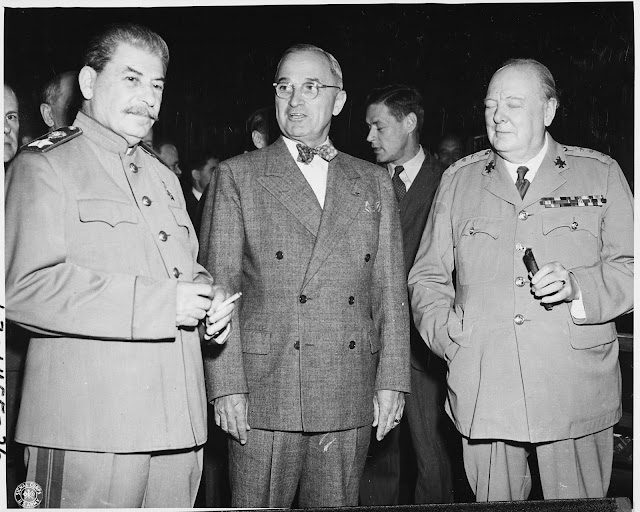 Every year at this time, I trace the final days leading up to the first (and so far only) use of the atomic bomb against cities, Hiroshima and Nagasaki, Japan, in August 1945.    This is a subject that I have studied and written about in hundreds of articles and three books since the early 1980s with a special emphasis on the aftermath of the bombings, and the government and media suppression in the decades after.   See my new book, The Beginning or the End: How Hollywood--and America--Learned to Stop Worrying and Love the Bomb.

July 24:   Truman at Potsdam discloses the existence of the atomic bomb to Stalin (who had possibly already been informed about it by his spies).  In his memoirs, a decade later, Truman would describe it briefly this way:  "On July 24 I casually mentioned to Stalin that we had a new weapon of unusual destructive force. The Russian Premier showed no special interest. All he said was he was glad to hear it and hoped we would make 'good use of it against the Japanese.'"

American officials present would assert that Stalin failed to grasp the import of the new weapon in future world affairs.  But a Soviet official with the Stalin party later claimed that Stalin immediately ordered his scientists to speed up work on their own weapon.  See views of Churchill and others who witnessed the telling.

Gen. Groves drafts the directive authorizing the use of the atomic bombs as soon as bomb availability and weather permit. It lists the following targets in order of priority: Hiroshima, Kokura, Niigata, and Nagasaki.  They are all large cities and orders are to drop bombs over center of them, thereby dooming tens of thousands of civilians for death. This directive constitutes final authorization for atomic attack--no further orders are issued.

Indeed, there would never be a separate order, even by Truman, to use the second bomb against Japan--it just rolled off, as if from an atomic assembly line.