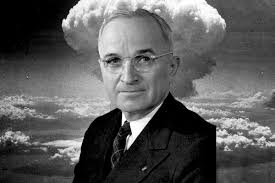 —Truman wrote letter to wife Bess from Potsdam on dealings there (but does not mention A-bomb discussions with Soviets): “I like Stalin. He is straightforward, knows what he wants and will compromise when he can’t get it. His Foreign Minister isn’t so forthright.“ Truman casually informed Stalin about the atomic bomb but no one is quite certain that the latter understood.

—Japanese sub sinks the U.S.S. Indianapolis, killing over 800 American seamen. If it had happened three days earlier, the atomic bomb the ship was carrying to Tinian would have never made it.

—A Newsweek story observes: “As Allied air and sea attacks hammered the stricken homeland, Japan’s leaders assessed the war situation and found it bordering on the disastrous…. As usual, the nation’s propaganda media spewed out brave double-talk of hope and defiance.” But it adds: “Behind the curtain, Japan had put forward at least one definite offer. Fearing the results of Russian participation in the war, Tokyo transmitted to Generalissimo Stalin the broad terms on which it professed willingness to settle all scores.”

—Assembling of the first atomic bomb continued at Tinian. It would likely be ready on August 1 and the first use would be dictated by the weather.  The second bomb—the plutonium device—was still back in the States. The target list, with Hiroshima as #1, remained in place, although it was being studied for the presence of POW camps holding Americans in the target cities.

—Secretary of War Stimson began work on the statement on the first use of the bomb that President Truman would record or release in a few days, claiming we merely hit a "military base," assuming the bomb worked.