When Truman Got MGM to Fire an Actor

My new book, published in July The Beginning or the End:  How Hollywood--and America--Learned to Stop Worrying and Love the Bomb, reveals (among other things) how President Truman and the military sabotaged the first movie about the atomic bomb, from MGM.   It climaxes, one might say, when the White House orders the key scene featuring Truman deleted and a brand new one showing him in a more favorable light re-shot.

At the same time, Truman or his top aide got MGM to fire the actor playing him--most likely after discovering he was secretly a member of the Communist Party.  The actor then exchanged rather amazing, and revealing, letters with the President.   Here is an excerpt from the book:
____ 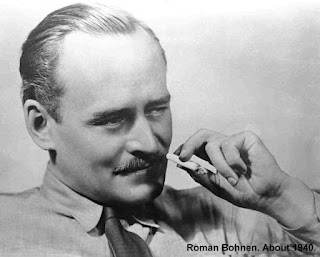 Along with submitting the script, MGM notified press secretary Charles Ross that it had suddenly decided to recast the role of Truman in the retakes. The note to Ross revealed that in the recasting “it must be emphasized that the President…is physically trim, alive and alert, and that his actions are brisk and certain.” This seemed odd, since the studio had previously bragged in publicity materials that the veteran actor originally cast in the role, Roman Bohnen, closely resembled Truman in appearance and manner.

The reason given to the press was that Bohnen lacked “military bearing,” even though he’d been shot from behind the whole time, as the White House had ordered. More likely Ross had discovered the actor’s left-wing activism—in fact, he was almost certainly a member of the Communist Party USA.

The firing of Roman Bohnen from The Beginning or the End soon went public and was attributed directly to the White House, surely a first in Hollywood history. Only later would we find out how Bohnen felt.

On December 2, 1946, after learning he was being replaced in the MGM movie, the actor wrote to Truman from his North Hollywood home. It was a polite but slyly critical letter. He noted Truman’s concerns about the depiction of his decision to “send the atom bomb thundering into this troubled world,” adding that he could “well imagine the emotional torture you must have experienced in giving that fateful order, torture not only then, but now—perhaps even more so.” So he could “understand your wish that the scene be re-filmed in order to do fuller justice to your anguished deliberation in that historic moment.”

People would be talking about his decision for a hundred years, he observed, “and posterity is quite apt to be a little rough” on Truman “for not having ordered that very first atomic bomb to be dropped outside of Hiroshima with other bombs poised to follow, but praise God never to be used.” His suggestion: Truman should play himself in the film! If he believed in his decision so strongly, why not reenact it himself? “Unprecedented, yes—but so is the entire circumstance, including the unholy power of that monopoly weapon.”

Ten days later, Truman responded warmly, apparently missing, or ignoring, Bohnen’s sarcasm. He thanked the actor for “suggesting to Mr. Mayer of MGM that I become a movie star,” but he had no talent for that. He then took time to defend in some detail the decision to use the bomb.

After the weapon was tested and the Japanese were given “ample warning” (actually not true), the bomb was used against two cities “devoted almost exclusively to the manufacture of ammunition and weapons of destruction” (the usual distortion). “As I said before,” Truman concluded, “the only objection to the film was that I was made to appear as if no consideration had been given to the effects of the result of dropping the bomb—that is an absolutely wrong impression.” There is little in the historical record or in Truman’s letters and diaries, however, to indicate that he did give strong and repeated consideration to the human toll in the Japanese cities, to the wide release of radiation—or to the consequences to letting the nuclear genie out of the bottle in an act of war.
Posted by Greg Mitchell at 11:52:00 AM