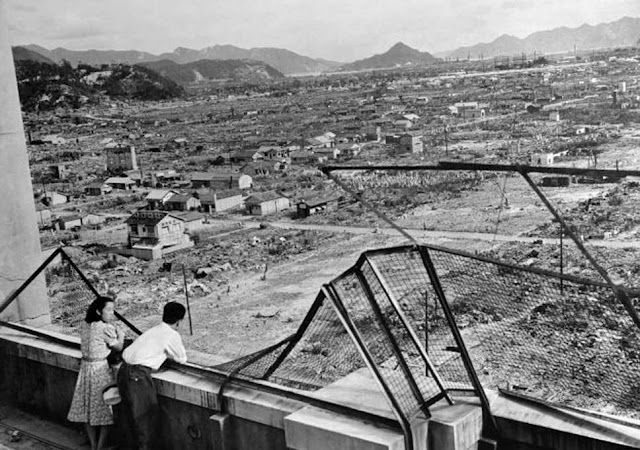 As I posted over the weekend,  every year at this time I trace the final days leading to the first (and so far only) use of the atomic bomb against cities, Hiroshima and Nagasaki, in August 1945.   In this way the fateful, and in my view, tragic decisions made by President Truman and his advisers, and others, can be judged more clearly in "real time."

As some know, this is a subject that I have studied and written about in hundreds of articles, thousands of posts,  and in three books, since my month-long reporting trip to the two cities in 1984, two trips to the Truman Library, plus mountains of other research.  Now this year I've directed an award-winning documentary.

We'll start that countdown in earnest on Thursday.   For now, briefly, on this date in 1945:  the scientists' assembly of the first "gadget" to be tested in the early hours of July 16--that is, exploded in the New Mexico desert--concluded near the Trinity site.   The Pentagon's official history of the day would put it this way:  "The full significance of these closing moments before the final factual test was not lost on these men of science. They fully knew their position as pioneers into another age. They also knew that one false move would blast them and their entire effort into eternity."

But today, as a bonus, as Part II to yesterday's opener, let's take a special look at the reaction to what would become the most important record of the effects of another "gadget" that would explode over a large city on August 6, 1945.

The article by John Hersey caused an immediate sensation. All copies of that's week's New Yorker sold out on newsstands. The mayor of Princeton, New Jersey, asked every resident to read it. Newspapers requested reprint rights, which Hersey granted if proceeds went to the Red Cross. Plans were announced for narrating the entire story over the ABC radio network on four consecutive evenings.

The New Yorker was flooded with requests for extra copies—Albert Einstein, for example, wanted one thousand to distribute to members of his Emergency Committee of Atomic Scientists. When Einstein sent out copies he included in his cover note, “I believe Mr. Hersey has given a true picture of the appalling effect on human beings. . . . And this picture has implications for the future of mankind which must deeply concern all responsible men and women.”

Columnists and editors, most of whom had expressed strong support for the use of the bomb, nevertheless praised the article, many calling it the strongest reporting of its time. The New York Times declared that every American “who has permitted himself to make jokes about atom bombs, or who has come to regard them as just one sensational development that can now be accepted as part of civilization . . . ought to read Mr. Hersey.” The editorial reminded readers that the “disasters at Hiroshima and Nagasaki were our handiwork,” and that the crucial argument that the bomb reputedly saved more lives than it took might appear unsound after reading Hersey. On top of that, Hersey chronicled the gruesomely unique way so many perished in death-by-radiation, which caused at least 20 percent of the casualties. Writing to New Yorker editors, the journalist Janet Flanner compared the article to Matthew Brady’s photographs during the Civil War, one of the first “records of how people really looked in war.”

Some readers felt this grim account of the first atomic bomb survivors was somewhat diminished by its surroundings—the usual ads for quality booze, Tiffany pins, leg cosmetics, and vacations abroad. A flood of letters to The New Yorker, however, revealed that most readers were terribly moved. A college student wrote, “I had never thought of the people in the bombed cities as individuals.” Many mentioned that they were now ashamed of what America had done. A young scientist, once proud of his work for the Manhattan Project, revealed that he wept as he read the article and was “filled with shame to recall the whoopee spirit” with which he and others had received the news of the bombing, recalling a “champagne dinner” that night. “We didn’t realize” the horror and human effects, he added. “I wonder if we do yet.”

One reader not pleased was Henry Luce, Hersey’s main employer. Time claimed that Hersey “had practically stumbled into” this story and that editor Harold Ross (“a man given to juvenile and profane tantrums”) had only printed the article at that length in one issue because he was notably short of good material. The novelist Thomas Mann had an interesting take himself. He hailed the article but declared it should not be translated for the postwar Germans because it is “their only pleasure to enjoy the mistakes and sins committed anywhere else in the world.”

Would “Hiroshima” provoke a public rethinking of the wisdom of Truman’s decision to use the bomb? To date that debate had centered on what to do with the next bombs, not what had been done with the first ones. Atomic scientists who had never before addressed the divisive Hiroshima decision—the Bulletin of the Atomic Scientists had just called it “water over the dam”—were now speaking out. Albert Einstein commented that the bomb probably was used primarily to end the Pacific war before Russia got into it.

Not everyone responded positively. “I read Hersey’s report,” one subscriber wrote The New Yorker. “It was marvelous. Now let us drop a handful [of atomic bombs] on Moscow.” General Thomas Farrell, currently being portrayed in the MGM movie, was so angry he asked Bernard Baruch to propose another article to the editors at the magazine— about six POWs mistreated by the Japanese and how they felt about the bomb. (That American POWs died in the Hiroshima attack would remain a secret for decades.)

Others felt Hersey had not gone far enough. The writer himself admitted to publisher Alfred A. Knopf that he had “been at great pains to keep the tone of guilt about using the bomb at a minimum.” The New York Times, in a second “minority opinion” editorial, charged that Hersey had merely “given us a picture of war’s horrors as the world has long known them, rather than a picture of the unprecedented horrors of atomic warfare.” The simple number 100,000— indicating the number killed in one day— conveyed more about the meaning of Hiroshima than any evocative anecdote.

The left-wing critic Dwight Macdonald was more caustic. Macdonald despised the article’s “suave, toned-down, underplayed kind of naturalism,” its “moral deficiency” in vision, its “antiseptic” prose. Naturalism, he suggested, was no longer adequate “either esthetically or morally, to cope with the modern horrors.” The writer Mary McCarthy mocked The New Yorker for declaring a moral “emergency” while surrounding the Hersey article with all those cigarette and perfume ads. While agreeing that the atomic bomb threatened the continuity of life, she unfairly characterized the key survivors in the Hersey article as “busy little Methodists”: “What it did was to minimize the atomic bomb by treating it as though it belonged to the familiar order of catastrophes. . . . The existence of any survivors is an irrelevancy, and the interview with the survivors is an insipid falsification of the truth of atom warfare. To have done the atom bomb justice, Mr. Hersey would have had to interview the dead.”

But it was Saturday Review editor Norman Cousins whose reaction would end up having the most impact. He had already argued that the bomb might have been aimed at the Russians as much as the Japanese. Now in an editorial titled “The Literacy of Survival,” he asserted that Americans, despite Hersey’s achievement, still did not fully comprehend what they had done. “Have we as a people,” he asked, “any sense of responsibility for the crime of Hiroshima and Nagasaki? Have we attempted to press our leaders for an answer concerning their refusal to heed the pleas of the scientists against the use of the bomb without a demonstration?” He concluded by calling for a national “moratorium” on all normal habits and routine, “in order to acquire a basic literacy” on the moral implications of the atomic bombings and the atomic age. If this accomplished little it would at least “enable the American people to recognize a crisis when they see one and are in one.”

What this editorial, along with the Hersey article, would accomplish more than anything was to inspire pro-bomb authorities, from James Conant to Henry Stimson, to take redemptive action, involving a quite different major article in another leading magazine, to reinforce the Hiroshima narrative they had promoted from the start.