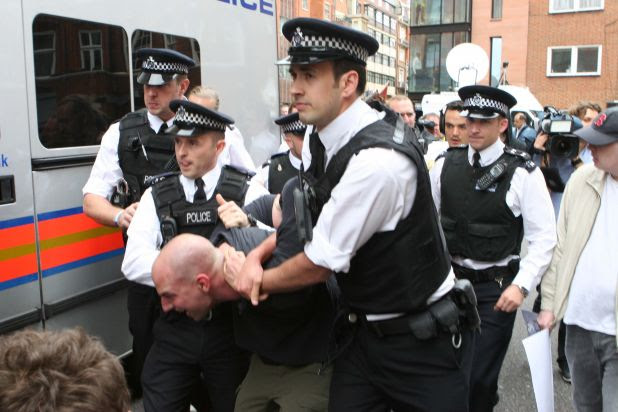 UPDATE #4  Brits continue defend move but now say no real "threat" to move on embassy and say this could go on for some time.  Also claim asylum should not be used to beat charges (even though no charges yet against Assange)... Vaughan Smith, who put up Assange at his manor for a year, says he believe Assange wants to go to Ecuador and should go there....Assange has offered to have Swedish officials come to the embassy and interview him about complaint.  They have refused.  All of this and more at The Guardian's live blog.

UPDATE #3  AP tweets just now:  "Sweden summons Ecuador's ambassador, calls Assange asylum decision 'unacceptable.'" .... Amazing:  NYT in basic report on what's just happened re: Ecuador and Assange, closes with a recounting of Assange as odd "houseguest"  in the past.  Yes, the newspaper has been feuding with Assange for ages, but was there are crying need at this point to re-cycle old pal's claims that he once abused a cat, and regularly failed to flush the toilet...  Full statement by Ecuador....And a wrapup from BBC.

UPDATE #2   Brits just called decision to grant asylum "regrettable" and "negotiation" best route to end crisis, which was what they said yesterday.  AJE covers here.   Of course, issue remains: How would Assange exit asylum?... See Guardian live blog here....Mark Weisbrot in Guardian op-ed hails Ecuador's decision to "stand up" to the U.S....UK @ForeignOffice says it has binding legal obligation to extradite Assange "shall carry out that obligation."  @WikiLeaks calls this "spin" and: "The UK is under a binding obligation to recognize asylum, the rights of refugees and its other UN agreements.".... Glenn Greenwald tweets:  "Every article on this should include that Ecuador offered: Assange will go to Stockholm tomorrow if no extradition to the US- Sweden refused."

Deal in the work? U.S. will bomb Iran if Israel bombs Ecuador.

Wild showdown in London, where Julian Assange has been holed up in the Ecuador embassy for weeks.  Several arrests outside this morning.  See new Guardian story and morning video... Rumors Tuesday had it that the president (of Ecuador) had granted him asylum and he might fly away--but no confirmation.  That decision, they say, comes at 1 p.m, London time...  Worries that the Brits may storm embassy, as Wash Post relates.   Foreign Minister Ricardo Patino  "charged that Ecuador received from Britain 'a written threat that it could assault our embassy' if Assange was not handed over."  More from BBC.

Sporadic live feed here. Second livestream below. Assange supporters called for demo at the embassy, and a few folks  showed  up late Wednesday and more early Thursday.  Police vans came and went all night.  Assange backers called a bunch of cabs who showed up at the embassy asking for Mr. Assange.

More from Wednesday night:   Follow @auerfeld for tweets from the scene.  Kevin Gosztola, co-author of our book on Bradley Manning is live-blogging updates at FDL....  at 10 pm ET:  @WikiLeaks tweets: "UK police have penetrated interior fire escape and foyer of Ecuador embassy building (but not yet the embassy, proper)."  Ecuador gov't says any move on embassy would be a "hostile act" and reminds Brits it is not a "colony."

New livestream from in front of embassy:

Live stream videos at Ustream
Posted by Greg Mitchell at 7:13:00 AM