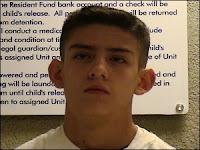 UPDATE #9  Tuesday  No important updates since late yesterday, but a press conference scheduled for today.  But I will note:  This tragedy--and object lesson--getting very little national attention.  The NYT, for example, carrying nothing more than weak AP story.   This shows how common these events have become.  You now need dozens shot in a theater, or a U.S. congressman nearly killed, or 20 school kids murdered, to cause much of a ripple.   Young Griego needed to carry out his plan of slaughtering dozens at WalMart--which he nearly did.

Yes this incident reflects so (sadly) perfectly the current gun control debate, including the easy access to weapons including an assault weapon--his father buying them, and then son taking them from unlocked closet, and using them.  And amid the debate over guns in schools--here's a kid who was home-schooled, and then killed three of his siblings, ages 2, 5, and 9.   And his father was a "good guy with a gun"--which was used against him.  Finally, why was the kid obsessed with violence for much of his life, as the stories suggest?

More evidence of how little this story has spread: Salon with a major piece today on how so many recent "killing sprees" started with slaying or targeting  a woman --and it doesn't even mention Griego shooting his mom.

UPDATE #8  This story suggests that this horrid shooting may spark new debate in state legislature over gun restrictions.   But quotes suggest that's not going to happen.  Instead we see same claim that only problem is "criminals" and maybe "crazy" people.  When that does not apply at all to this massacre.  The kid took weapons, including AR-15, from unlocked closet.   But state will offer no new laws to restrict such weapons, or mandates locks or--anything.

UPDATE #7  More shocking details:  Kid shot mother in head, then emailed photo of her dead to girlfriend (no account of what girl did).  Brother, 9, cried so he shot him in head.  Then brothers age 2 and 5, so they were shot, too, all with a .22, which he got from dad's unlocked closet.   Then got out the assault rifle to shoot dad when he came home.  As reported earlier (see below), he started to drive to WalMart to kill "random" folks and then, he hoped, get shot by cops.

UPDATE #5 Monday   Albuquerque Journal in shocker reports that police now believe the kid had loaded more weapons in a van and planned to drive to nearby Walmart and gun down many more people and then shoot himself--but called a friend first who talked him into stopping by church first, where security called police.

Story also with details on shooting mother and young siblings  in their beds, then waiting for hours to kill his dad.  And this:  "Authorities believe Nehemiah’s parents owned the guns. The weapons had been stored in a closet, not in a gun safe. They also believe Nehemiah may have had violent fantasies including killing and murder-suicide scenarios for much of his life."  But neighbors claim he was not allowed to watch violent video games.

Mass slayings now so common in USA, the NYT does not have a single word on this incident right now.  Also:  Kid fits profile of all of the recent mass-slayers:  young, white. 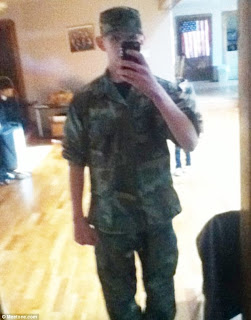 UPDATE #4 Still no details on motive but a little more on the shooter, age 15, including photos (that's him at left in his usual camouflage outfit, with small child behind him), fact he was home-schooled, and more.  Still no word on who owned the AR-15 and other weapons, but I am guessing will turn out to be the dad. The whole sad episode makes a sick joke out of NRA's guns-in-school and good-guys-with-guns idea.  Here's a kid who didn't even go to a regular school and likely took family weapons and turned them on "good guy" who had guns but could not defend himself and family.

Much more here from Christianity Today--the church is quite prominent and controversial-- including blog post from friend who says the father was former gang member who then led rich life and would allegedly forgive his son for what he did.

UPDATE #2 Albuquerque Journal daily newspaper confirms that neighbors say that indeed the five dead all members of the Griego family (the deceased parents had 10 children in all, according to his bio on the church web site).  Then there's this:  "The suspect, Nehemiah Griego, 15, was not well known among those living within a block or so of the family’s home on Long Lane in the South Valley.  However, neighbor Peter Gomez said he saw the boy walk with siblings and his parents through the neighborhood regularly, and he 'wore nothing but camouflage stuff.""


UPDATE  #1 Yes, police confirm, the kid used an AR-15.   He has been IDed as Nehemiah Griego.  One press report says victims were kid's father--a pastor or former pastor--and others in family.   Local TV station now says friends of the dead man say it is indeed pastor Greg Griego (left).   He was spiritual counselor to the Albuquerque Fire Department.  A local TV site says the three deads kids were all of "elementary school age."  MeetOne page for a Nehemiah Griego of Albuquerque, not necessarily him.

Earlier:  All we have from AP now below.  But local TV reports boy is 15, and assault rifle (and other weapons) found nearby.  On on KOB-TV home page, the #2 story below that has headline: "Gun Advocates Rally at State Capitol."  Another local station, KOAT, reports all of the victims were shot several times and more than one weapon may have been used.  AP:


ALBUQUERQUE, N.M. — Authorities in New Mexico say a teenage boy has fatally shot two adults and three children inside an Albuquerque home. The boy has been booked on murder and other charges.

Williamson says investigators who received a report of the shooting Saturday night are trying to determine whether the victims were related.