As I did yesterday,  I'll be updating often on Edward Snowden and issues related.

6:05 Another good and vital commentary from John Cassidy at The New Yorker on Snowden case, and the MSM "outrage" over him and Greenwald.   "Having spent almost eighteen years at The New Yorker, I’m arguably just as much a part of the media establishment as David Gregory and his guests. In this case, though, I’m with Snowden—for the reasons that [Thomas]Drake enumerated, but also because of an old-fashioned and maybe naïve inkling that journalists are meant to stick up for the underdog and irritate the powerful. On its side, the Obama Administration has the courts, the intelligence services, Congress, the diplomatic service, much of the media, and most of the American public. Snowden’s got Greenwald, a woman from Wikileaks, and a dodgy travel document from Ecuador. Which side are you on?"

3:40  Andrew Ross Sorkin (left) was caught saying on Morning Joe today re: Snowden and Greenwald:  "I would arrest him and now I’d almost arrest Glenn Greenwald, the journalist who seems to be out there, he wants to help him get to Ecuador."  When various journos called him on it, he disgraced himself further, by tweeting the following (like David Gregory, wanting to get the idea out there--"almost" endorse it--then claim he was musing):  "@ggreenwald just to be 100% clear: i am not saying you or any journalists should be arrested. i'm FOR transparency. i was raising other q's."

3:30  A little "pilot humor" spotted by a New York magazine writer at Twitter: @HenrySchulman:  "Pilot came on PA and said, 'Is there an Edward Snowden on board? If so, please ring your call button.'"

1:50  Amnesty Int'l officially declares:  U.S. Must Not 'Hunt Down' Snowden.  Or prosecute him. "The organization also believes that the National Security Agency (NSA) whistleblower could be at risk of ill-treatment if extradited to the USA.

"No one should be charged under any law for disclosing information of human rights violations by the US government. Such disclosures are protected under the rights to information and freedom of expression," said Widney Brown, Senior Director of International Law and Policy at Amnesty International.

1:00  Key new detail in Wash Post tick-tock on Snowden's mysterious departure from Hong Kong:  His "preferred" beverage of choice is Pepsi.  So let's see if their stock rises or falls tomorrow.  Pepsi Veneration.

12:30  That Hong Kong newspaper that hung out with Snowden finally published today part of interview from a week ago, in which he admits that he took that job with contractor Booz, Allen, specifically to get access to more docs.  This was after he made initial contact with journos re: what he already had.

11:40  Headline on new NYT story: "For Snowden, a Hasty Exit Started With Pizza Inside a Hong Kong Hideout."  Supposedly Snowden decided to take flight when lawyer told him that he could end up in jail for a couple years while asylum in Hong Kong was being decided--without a computer! He didn't mind being in jail-like apartment, because had laptop, but if no access...

11:10 Charles Pierce almost outdoes even himself in his post today on yesterday's infamous Gregory-Greenwald encounter: "This was a career defining moment. It's rare that someone reveals himself quite as clearly as the Dancin' Master does in that little by-play. He will 'debate' who is or is not a journalist, and the rest of us can wait under the balcony and wait for scraps. The clearly batty Peggy Noonan is a journalist, but Glenn Greenwald may not be.  Journalism has sickened itself with respectability, debilitated itself with manners, crippled itself with politesse, and David Gregory may well be Patient Zero for all of this. As my Irish grandmother used to say, mother of god, who the hell is he when he's at home?"  And it's time to revisit Gregory dancing with famed rapper, Karl Rove.

11:00 As we noted below, bunch of journos on that plane to Cuba, without booze, and without Snowden.  Topping them:  The Guardian reports,   "The Guardian's Rory Carroll, who recently published his biography of the late Venezuelan president Hugo Chavez, is traveling to Ecuador on the chance that Snowden will turn up there." In a tweet, Carroll quoted "Waiting for Godot."

10:40  Later in the media phoner: Assange reveals (as I predicted yesterday0 that Snowden applied for asylum to countries beyond Ecuador.  That's why I've never considered Ecuador as certain landing spot.

10:15  In media phoner, still going on,  WikiLeaks says Snowden is safe and well but they won't disclose location.

10:00 My new piece at The Nation on the major McClatchy scoop on Obama's "Inside Threat Program."

9:15  Important Jay Rosen post on David Gregory vs. Glenn Greenwald (and all journalists).  Gregory's premises "packed a punch." Claiming that journos "aid and abet" sources is how severe crackdown on all begins.  "Gregory’s attempts to separate Greenwald from normal practice matter." And 12 other points. 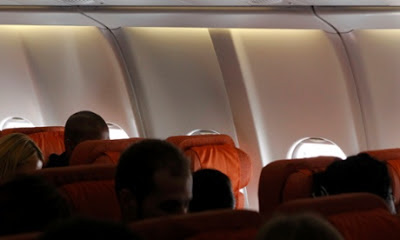 8:50  Sad:  The Guardian says this is the empty Snowden seat on the plane (via Reuters).  AP has its own, slightly more arty, pic.  See below for journos on board without him.  Well, they'll get some good flan out of it in Havana maybe.   Update:  We have learned that no booze served on this flight.  Journos, of all people-- bamboozled and boozeless!

8:35   Ecuador says Snowden cites probable persecution in U.S. for his reason for seeking asylum.  Its foreign minister at press conference won't disclose where he is and reveals they are still considering his request.  Also, they want to have good relations with the U.S.  And WikiLeaks lays out his legal case.  L.A. Times: How the U.S. tried to keep Snowden in Hong Kong and failed.  Meanwhile,

8:05 a.m. Well, that's interesting.  That Moscow-to-Cuba flight has left he building and Edward Snowden was not on board this morning.  WikiLeaks said yesterday he had a ticket to ride, possibly with one of its staffers.  It could be that he's just working out details of asylum in Ecuador or the U.S. has got Russia to hold on to him, or something.  "Mr. Snowden has not been seen publicly or photographed since his reported arrival in Moscow on Sunday afternoon from Hong Kong."


Although there were a scattering of tourists carrying bags from the duty-free shops preparing to board the plane, a large number of the passengers were journalists trailing Mr. Snowden on the Russia-to-Cuba leg of his extraordinary odyssey, which began early Sunday when he fled his hideout in Hong Kong.

Several journalists carrying American passports were ejected from the aircraft because of visa requirements to visit Cuba.