Deaths of 4 Kids in Gaza, Witnessed by Journos, Draws Outrage 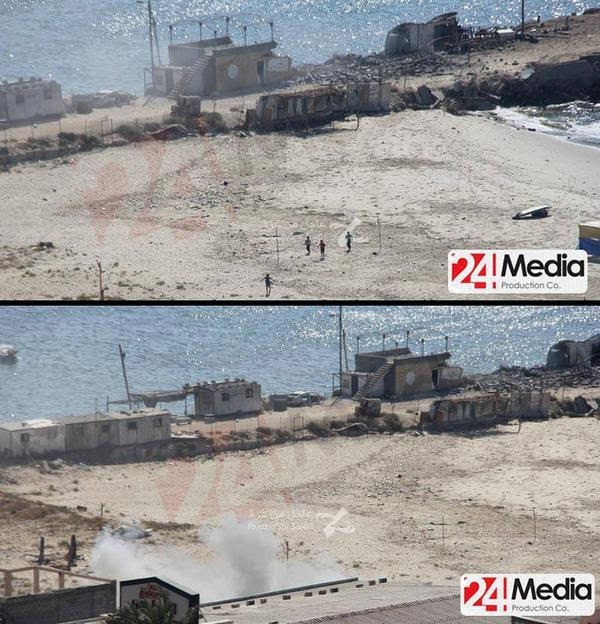 Updates #2:   Graphic video of immediate aftermath of attack....NBC  orresppondent Ayman Mohyeldin tweets:  "4 Palestinian kids killed in a single Israeli airstrike. Minutes before they were killed by our hotel, I was kicking a ball with them." Alexander Marquart of ABC News:  "Just saw badly mangled body of young boy pulled from a smouldering shipping container hit by #Israel strike in front of our hotel." Tyler Hicks, famed photo, tweets rather dryly:  "Witnessed 3 young boys killed by Israeli ordinance on an otherwise empty beach this afternoon in Gaza City."

Updates:   Image above purports--not confirmed--to show killing of the four kids or possibly the second strike that hit survivors of the first (three children and one adult). ... New report from Wash Post correspondent who witnessed, plus gripping Reuters photo.  Attack was near journo hotel.... NYT report, as usual, plays up rocket attacks on Israel--and all those fruitless "warnings" from Israel.  Also, funeral of the one Israeli who had died.  Very brief mention of the four dead kids....

Follow tweets from the scene by @PeterSBeaumont, correspondent for British papers, including: "Today was a personal low point - giving first aid with colleagues to two children wounded by shrapnel on Gaza beach on terrace of our hotel...1st shell hit the harbour wall. It's been hit before so I assume its on a prerecorded grid. Gunner appears to have adjusted to hit survivors."  Now The Guardian posts his full account....

The alleged names of the dead may live in infamy:  Ahed Bakr, 10, Zakaria Bakr, 10, Mohd Bakr, 11, and Ismail Bakr, 9....See photos of journalists treating injured kids, some of whom died....

Four children were killed Wednesday by an Israeli airstrike on a port in Gaza that was witnessed by an NBC News team in the area. The children died from their injuries after beign taken to hospital. They were carried from the scene of the attack, on the beachfront, and through the lobby of a hotel being used by Western journalists. The attack, at around 4 p.m. local time (9 a.m. ET), appeared to be the result of an Israeli naval shell.

Speaking to MSNBC afterwards, Mohyeldin said the consequences of the attack showed that warnings from the Israeli military to evacuate targeted areas were proving ineffective. "The vast majority of the people here do not take the warnings seriously because it's not clear where they are supposed to evacuate to," he said. "The entire Gaza Strip has been struck [by Israeli airstrikes]." He added that Hamas calls the warnings psychological propaganda and urges civilians not to pay attention. The strike comes the day after the first Israeli was killed by a Gaza rocket since the recently renewed tensions. More than 200 people in Gaza have been killed by Israel, with as many as 80 percent of them civilians according to the United Nations.