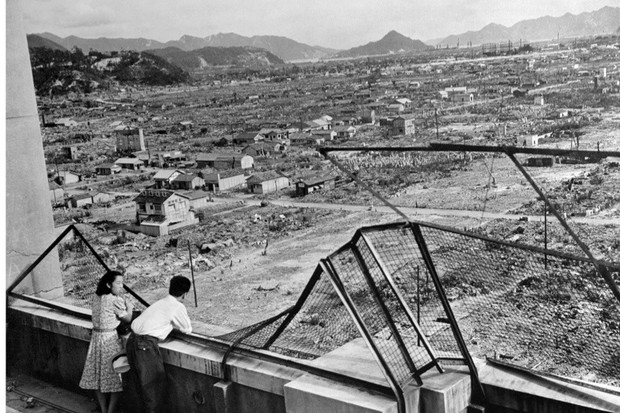 Seventy-six years after the atomic attacks on Hiroshima and Nagasaki, the bomb is still very much with us and controversy continues to swirl over the decision to obliterate the two Japanese cities.  My new book, The Beginning or the End: How Hollywood--and America--Learned to Stop Worrying and Love the Bomb, certainly puts this center stage.

Hiroshima, in any case, remains a vital lesson for us all, not only for the first use of a nuclear weapon there, but because of the “first use” nuclear policy the U.S. maintains today.

Even the fact that the U.S. still has a first-strike policy (meaning we will use nukes first in a crisis if need be) will surprise many, especially with the end of the Cold War now a distant memory for some.

It’s a subject practically off-limits in the media and in American policy circles. Even the  antinuclear documentary Countdown to Zero, which outlined many serious nuclear dangers (from an accidental launch to a terror attack on America), failed to even mention the possibility that the U.S. might choose to use nuclear weapons again. Resisting a no-first-use pledge, in fact, has been a cornerstone of U.S. nuclear policy for decades.

Following a few positive signs from Obama, I fear that moving very far in the direction of no-first-use is still a long way off in Trump's America.

Perhaps the strongest reason is this: most Americans, our media and our leaders (including every president), have endorsed our “first-use” of the bomb against Japan. This remains true today, despite new evidence and analysis that has emerged for so many years. I’ve been probing this for over thirty years — in hundreds of articles, a new film, in three books — with little shift in the polls or change in heart among our policymakers and elected officials.

There has also been little change abroad — where the use of the bomb in 1945 has been roundly condemned from the beginning. Indeed, U.S. support, even pride, in our use of the weapon has given us little moral standing in arguing that other countries should not develop nuclear weapons and consider using them, possibly as a first, not a last, resort (that’s our policy, remember).

So it all goes back to Hiroshima and Nagasaki.

While I respect the views of a range of historians on this matter, and the opinions of the men who fought in the Pacific, I happen to believe the bombs should not have been used against Japan — directly over the center of massive cities — at that time. The war would likely have ended very shortly without it (the bloody American invasion was not set until months later), largely because of the Soviets finally declaring war on Japan — an event long-dreaded by Japanese leaders.

Yes, there was a day when conservatives like John Foster Dulles, columnist David Lawrence, Admiral William Leahy and General Dwight D. Eisenhower — “We shouldn’t have hit them with that awful thing,” Ike declared — clearly condemned the use of the bombs. They knew that the argument of “saving tens of thousands of American lives” only counted if an invasion actually was necessary. We had demanded “unconditional surrender,” dropped the bombs — then accepted the main Japanese demand, keeping their emperor as figurehead.

But the key point for today is this: how the “Hiroshima narrative” has been handed down to generations of Americans — and overwhelmingly endorsed by officials and the media, even if many historians disagree — matters greatly.

Over and over, top policymakers and commentators say, “We must never use nuclear weapons,” yet they endorse the two times the weapons have been used against cities in a first strike. To make any exceptions, even in the past — and in certainly a horrid situation — means exceptions can be made in the future. Indeed, we have already made two exceptions, with more than 200,000 civilians killed. The line against using nuclear weapons has been drawn... in the sand.

To cite just one example: Before our attack on Iraqi forces in Kuwait in 1990, then-Pentagon chief Dick Cheney said on TV that we would consider using nuclear weapons against Iraq but would hold off “at this point” — then specifically cited President Truman’s use of the bomb as morally correct. Some polls at the time showed strong support from the American public for using nukes if our military so advised.

And other polls since then show the same thing concerning other nuclear scenarios. Recent ones show as many as half of U.S. citizens would support on first-strike on Iran or North Korea--even if it might kill a million of more.

And, as I’ve noted, the fact that the United States first developed, and then used — twice — the WMD to end all WMDs has severely compromised our arguments against others building the weapon ever since. Hiroshima was our original sin, and we are still paying for it, even if most Americans do not recognize this.

That is why I always urge everyone to study the history surrounding the decision to use the bomb and how the full story was covered up for decades. (You could do worse than try my new book,  The Beginning or the End: How Hollywood--and America--Learned to Stop Worrying and Love the Bomb,)  There is certainly, in the minds of the media and the American public, no taboo on using nuclear weapons, and it all started, but did not end, with Hiroshima and Nagasaki. This is what nuclear abolitionists — or even those who simply want a partial easing of our first-use policy — are up against.
Posted by Greg Mitchell at 8:24:00 AM