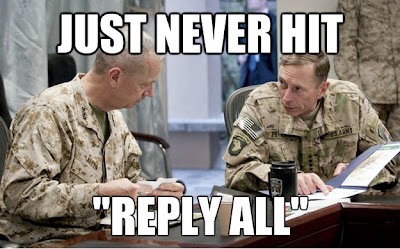 UPDATE #1  Wash Post this morning adds claims by senior U.S. official:  Allen not in "sex scandal," he has 1) never been alone with Kelley 2) "only" sent her hundreds, not thousands of emails  3) called her "sweetheart" in emails but just "platonic" 4)  Allen got one email from Broadwell which he may have mentioned to Kelley--possibly even the step that IDed her. Kelley then contacted her shirtless FBI friend.

Earlier: And now it comes out that the U.S. commander in Afghanistan has also been implicated as the FBI probe into the Petraeus scandal ensnares him.  It seems Ms. Jill Kelley is in the middle of everything--forget the OTHER woman tag.  NYT story.   Ironically, the Times had just posted a Thom Shanker story on concern rising about the many "ethics" problems among top brass beyond Petraeus.

Wash Post: "The FBI probe into the sex scandal that led to the resignation of CIA director David Petraeus has expanded to ensnare Gen. John R. Allen, the commander of U.S. and NATO troops in Afghanistan, the Pentagon announced early Tuesday.

"According to a senior U.S. defense official, the FBI has uncovered between 20,000 and 30,000 pages of 'potentially inappropriate' e-mails between Allen and Jill Kelley, a 37-year-old Tampa woman whose close friendship with Petraeus ultimately led to his downfall. Allen, a Marine, succeeded Petraeus as the top allied commander in Afghanistan in July 2011."  One assumes there were not thousands of emails but perhaps many emails with hundreds of pages of documents.

USA Today update:  A senior unnamed official would not say whether the 20,000 documents "involved sexual matters or whether they are thought to include unauthorized disclosures of classified information. He said he did not know whether Petraeus is mentioned in the emails."

Wash Post update: The new report "calls into question the personal behavior of two of the U.S. military’s highest-ranking and most respected figures, who apparently ignored concerns about the highly sensitive nature of their positions as they embraced personal relationships with younger women who were not their wives."
Posted by Greg Mitchell at 2:24:00 AM

aire bra
Such a nice one article, during the reading this article i found very good information,
my knowledge has been increase my wishes with u i hope you will keep it up..............