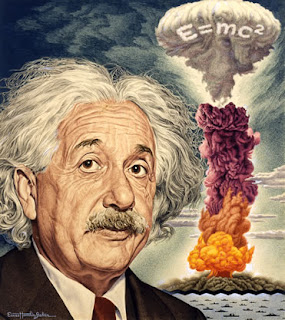 While my book, published today,  focuses on how the first Hollywood epic on the atomic bomb, MGM's The Beginning or the End, was heavily revised (gutted) in 1946 under severe pressure from by Truman and the military, it also explores at length the surprising extent of FBI surveillance of leading atomic scientists suspected of left-wing sympathies: J. Robert Oppenheimer, Albert Einstein, Leo Szilard.   This include phone taps, mail openings, and following them in the street and across country.   I make use of docs and phone tap transcripts from FBI files.  It was the beginning of the end, one might say, for Oppenheimer's fall, leading to losing his security clearance after a famous hearing.

It's all quite shocking--as is the courting of these men by MGM, and the fact they all finally succumbed--but also, at times, amusing.

A very brief excerpt involving Szilard and another famed scientist, Enrico Fermi, as well as the director of the Manhattan Project, Leslie Groves:

An Army colonel at the War Department asked J. Edgar Hoover to open a full probe of Szilard, as "he has constantly associated with known 'liberals'...and has been outspoken in his support of the internationalization of the atomic energy program."

One of the many reports from agents in his FBI file for 1946 admitted that Szilard was "well aware that he has been watched closely inasmuch as the post office inadvertently advised SZILARD and FERMI that General GROVES had ordered all their mail to be opened."
Posted by Greg Mitchell at 9:02:00 AM