That 'Other' Ferguson Area 'Officer-Involved' Shooting

Go here for my Thursday updates.

As you probably know, another young black man was shot and killed about three miles from Ferguson, MO, yesterday afternoon, this time by two young (white) officers.  I posted this yesterday:


Not sure why media and most locals seem okay with explanation of shooting of the young black man with knife--now IDed as Kajieme Powell, age 25--near Ferguson, trusting police account.  Indeed, the account itself may be mainly accurate but the fact remains, the dead man was known to have severe mental issues and even with knife was there no other option for two white cops, such as tasering or momentary retreat?  Chris Hayes among those who seem very impressed that Police Chief Sam Dotson waded into crowd to take questions--but that doesn't mean the shooting itself was fully warranted.  Just asking.  This young man was just a bit older than Mike Brown--and allegedly known to be mentally impaired.  He had taken two energy drinks--and a muffin from the store.  Earlier Hayes had tweeted:   "People here not disputing the knife, but all asking 'why not shoot him in the leg?'  'I thought they were supposed to have training.'"

Update #1:  Certainly, the St. Louis police have been more open in stark contrast to the Ferguson variety.  They posted this incident report within hours, for example.  (But note that it lists the "victims" as the two police officers.)  And this video from inside and outside the store today.  But a couple points.  The chief has now confirmed, it seems,  that the officers had tasers--but did not use them because the victim was wearing a sweat shirt which the wires may not penetrate.  But the video clearly shows that it is a mostly unzipped sweat shirt with t-shirt underneath and plenty of space to hit him in chest.  The video also does not show the shooting at all--it stops when the store owner goes outside to try to get Powell to pay.  The chief has also now revealed that each cop fired six shots.

And they say they have recovered knife--but have not described length or shown picture of it.  So questions remain. Meanwhile, I have not been able to find any background on Powell, beyond claim that he was from outside area and living with kin and until shot was telling folks he was upset that his mother had recently died. 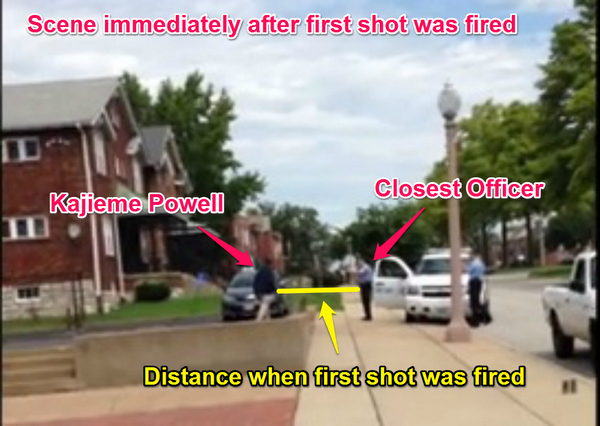 Update #2   Now a cell phone video has been posted on You Tube. A little distant but see what you think--as witness keeps saying "they could have tased that man."  Note that Powell appears to be slowly walking toward officers--with arms asides--and far from rushing them or lunging at them.  He is also much further from them than Dotson has claimed--at least 8 feet from one and 13 feet from the other (who is also partly behind car). when shot--although he then tumble closer.  Dotson yesterday said he was only two or three feet from the officers when shot, which "is a lethal range for a knife,” said.  He also called it "life and death" situation and claimed victim was "three to four feet" away.  Jeff Roorda of the St. Louis Police Officers Association calls the video "exculpatory." Your thoughts?

Too far to see knife in hand but you see him take hand out of pocket, possibly with knife in it, as he approaches cops.  Must be fairly small knife to fit fully in pocket of hoodie.  Police Chief Dotson yesterday said he had been holding it with overhand grip, which would suggest a scary lunging action.  Today he corrected to say actually it was underhand, perhaps at side, a quite different image.   Passersby (and the man in red cap who I think is the store manager he had just shoplifted from) had been laughing at him in the seconds before so one wonders how big his knife might have been.  A couple of media reports have casually referred to it as a "steak knife" but I've seen no official report on that.  Final touch:  Cops shoot him five or six times while on ground, then handcuff him. (Vice News visited scene last night and found shop owner with M-16 out ready to defend store.)

You can clearly hear Powell say "shoot me" and he also takes a glance behind him as if afraid others in line of fire--then moves away to the left.  Haunting.

Update #3  Chris Hayes promised me on Twitter he would cover this tonight and he just did.   Hayes shows Dotson today describing what's in video--far different from what is in it (he has Powell wandering from one side of car to the other, you'd never know it was all over in 14 seconds).  Then praises Dotson for calling victim's grandmother.  Then interviews St. Louis mayor who says they released video because guy who shot it was "shopping it" around (so had no choice).  Hayes affirms officers followed "training protocol."  But says some who see video might ask if non-lethal force could have been used.  Mayor says, well, we'll look at it.

No questions about disparity in Dotson account vs. video, use of tasers, and so on. Then Hayes on to fear of crowd protest and it's over. Hayes says he's watched video, and knows police chief has put out false info on shooting but lets it go.  I'm told CNN for Anderson Cooper's show did show part of video--but then someone said you have to give "benefit of a doubt" to the police.

Update #4 Dotson on live on CNN with Don Lemon just now.  He admits that Powell's hand with knife was by side, but still posed threat.  "The officers did what I think you or I would do, they protected their life in that situation." He then claims tasers not 100% sure thing so you have to shoot or you have an injured officer (but no means clear in this case).  Then claims they released video "when we didn't have to" though mayor (see above) had said they released because they knew it was about to come out.   Then got no tough questions but usual thanks plus handshakes for being "open."

Then, later, Mark O'Mara, attorney, tells Don Lemon that maybe one cop could have used taser and the other taken one shot.  But then says cops usually can get away with this. Another guest named Julia then says cops trained heavily to avoid shooting so you can't support firing so much. Good new piece on video by Ezra Klein at Vox.  Raises question about troubling gap between police feeling this is "exculpatory" and most people feeling the opposite.  Also:  What if police were unarmed and had to find another way to handle (as happens all over the country every day when police are confronted by crazy street people).

Very similar call last night in Azusa, CA ended completely differently: 5 hour discussion trying to talk the man down, including special trained Mental Health representatives, ending unfortunately in injury despite their efforts but thankfully not in death. Ferguson is WAY out of control

"Cops handcuff him on ground after shot numerous times."

Cut off a wolf's head and it still has the power to bite.

The police were responding to a shoplifting call. Why would you even *think* to take a special trained Mental Health representative on that kind of call?

They get there and within seconds, the guy goes at them aggressively.

They didn't have time for a field interview and determine ANYTHING about the guy other than he was coming at them with a knife.

Did they have other means (tazer, stun guns, etc.)? Who knows.

Could they have shot lower? Do the only train to shoot center mass?

In the end - these cops will be cleared and the video will be the prime evidence.

I am not sure why people keep forgetting (or just do not think) that a knife is a deadly weapon, especially when the person is closing the gap and coming at you.

It wasn't over "two sodas" as the one guy kept saying. It was over going at cops with a knife and not stopping.

Wayne said...
This comment has been removed by the author.
Thursday, August 21, 2014

Ask a cop what percentage of pedestrian encounters involve the mentally ill, and you'll wonder why every cop isn't a mental health crisis intervention specialist.

These officers followed the book and the law, and will be cleared.

But that doesn't change the fact that if they had been committed to the idea of taking this guy in uninjured, they likely could have.

Unknown said...
This comment has been removed by the author.
Sunday, October 26, 2014