A Bite-Sized History of Jefferson, Hemings, and French Cuisine in USA

I've written the following in honor of publication tomorrow of my Ph.D  daughter's first book, for The New Press, co-authored by her cheesemonger husband.   Their book, A Bite-Sized History of France,  has been hailed by  all the pre-publication reviewers, with great blurbs by experts/writers, and with TIME magazine calling it one of the 22 must-reads of the summer.  They are doing a free talk with food/drink at the cool Albertine bookstore at the French Embassy in NYC tomorrow at 6 (please come), that's Tuesday; a sold-out event at famous Murray's Cheese on Bleecker the next night, then on to another food/drink event at new Politics & Prose at Union Market in D.C. this Saturday and then on to San Francisco.  Here's my contribution on  history of French cuisine in....America. 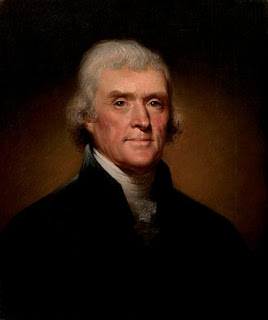 Gourmet Magazine named him one of the country’s twenty-five most influential culinary figures, citing his “abiding appreciation of French food,” his promotion of gourmet dining,  and introducing new crops. That put him right up there with the likes of Julia Child, cookbook author Fannie Farmer, and McDonald’s founder Ray Kroc.

Jefferson was a true foodie, an early devotee of farm-to-table.   He planted hundreds of varieties of fruits and vegetables in gardens at Monticello and introduced several known by few, such as broccoli, tomatoes, eggplant, peppers and peanuts.    In a notebook he recorded the planting.  "He was always in search of new additions to his garden collection," observes food historian Tori Avey. "He and his staff cultivated all kinds of food plants, from Italian grapes to French tarragon to Texas peppers to Irish wheat."

Jefferson was particularly passionate about asparagus at Monticello and even developed, and closely documented, a new cultivation technique mulching the plants with tobacco leaves. 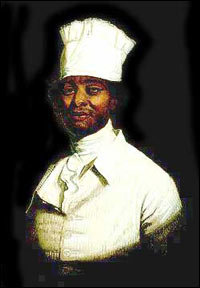 During his tenure as American minister in Paris from 1785-1789, he was introduced to French cooking.   His lavish dinners in Washington, D.C., combined what might be called classic "southern" cooking with French stylings and even African influences  (borrowed from his slaves).  His slave James Hemings, brother of Jefferson's mistress Sally,  accompanied his former master to France, at the age of nineteen.

There he was apprenticed to a caterer named Combeaux, a caterer, where he had to learn French as he was taught culinary skills.   Jefferson, meanwhile, dined at Versailles,  sipped wine in Burgundy, and even ordered take-out from his home at the Hôtel de Langeac on the Champs Elysées.

Returning home, Hemings became chief cook at Monticello, leading to Jefferson granting him his freedom.   Then his brother Peter took over. A top priority when Jefferson became President in 1801 was to hire a French chef, which he did after James Hemings turned down the position.  Hemings did return to his position at Monticello for a spell.

In his book  Thomas Jefferson's Creme Brulee: How a Founding Father and His Slave James Hemings Introduced French Cuisine to America,"  Thomas J. Craughwell offers numerous claims, including that  Jefferson, a connoisseur of French wine, popularized champagne by serving it at nearly every dinner he hosted as  President.

Americans had been introduced to French cooking during the American Revolution. "Our French allies brought cooks as well as troops," Craughwell writes. "But French cuisine had no staying power here; after independence, the French returned home, and America went back to decidedly more mundane menus.

James Hemings left behind only eight written recipes but about 150 have been attributed to him over the years.

Craughwell  told an interviewer, “Thomas Jefferson was our first gourmet. He thought about food more than anybody else in America during his life. His views and interests, in fact, were a good 200 years ahead of his time.”